The strong winds died down a bit on Saturday morning so we left El Centro and headed east and south to our next stop in Ajo, Arizona.    This small town is smack in the middle of nowhere and doesn't have much to offer nowadays unless its a quick stop on your way into Mexico.    It once was a thriving mining community with a lovely little downtown area.    My camera died as I was taking pictures of the central square so I only have a few shots of the two white churches flanking it.  The square and churches reminded us very much of a Mexican town. 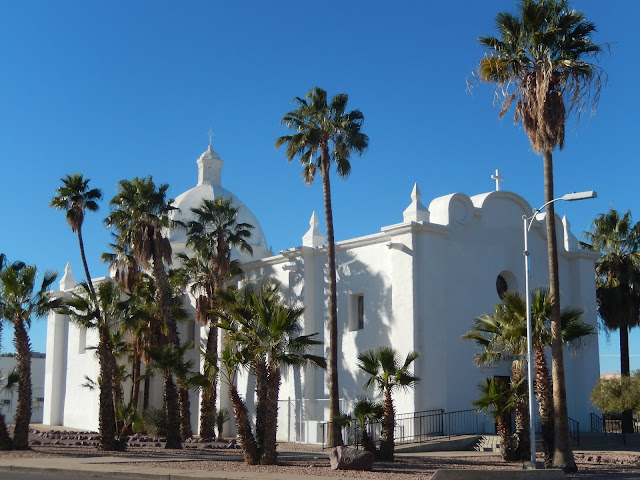 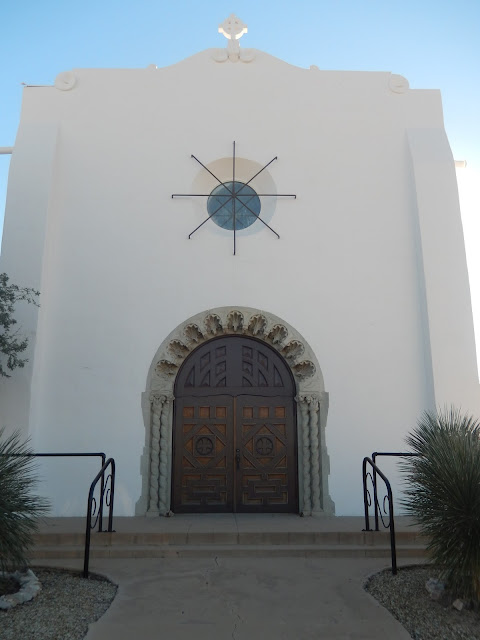 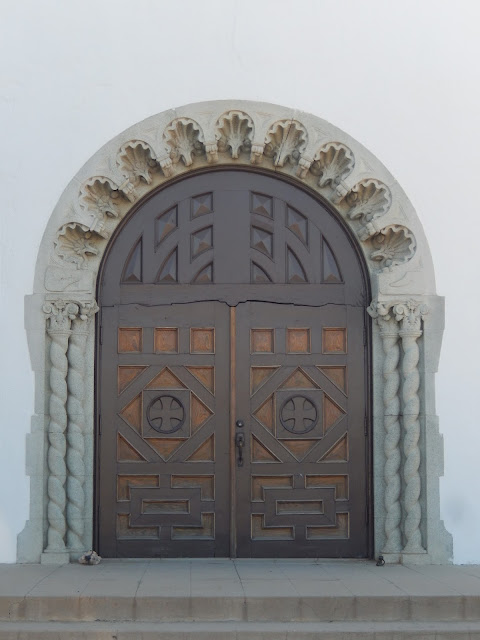 The town is a mix of small neatly kept homes, abandoned shacks and quirky, one of a kind places. 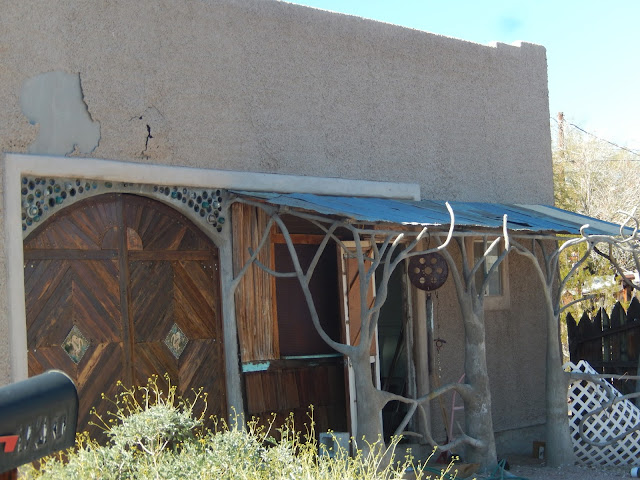 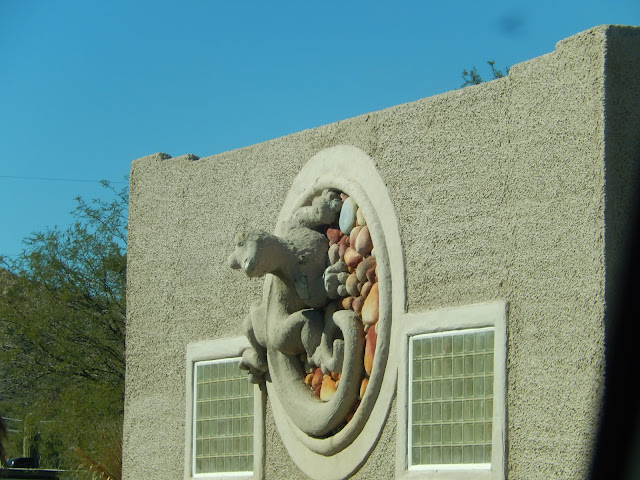 Just down the street from our campground, Shadow Ridge, is a very old house trailer painted in a bright rainbow of colors.   It is neat and clean with interesting sculptures in its yard.   Next to it is a home that is falling down, literally.

Lots of border patrol presence here as it is so close to Mexico. Our campground has two full rows of trailer/manufactured type homes owned by "the government" to house the increasing number of border patrol employees. 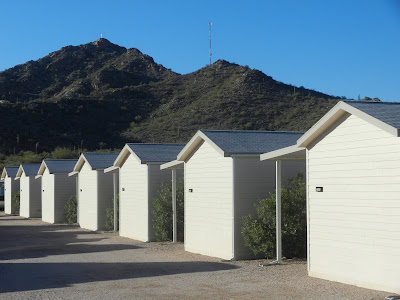 People are extremely pleasant and friendly both in the campground and in the town.   There is one small grocery store and its aisles go from groceries to plumbing and building supplies and back again with no obvious rhyme or reason.

In the morning and evening a troop of Javelina roam the campground looking for whatever they look for, food probably.   The manager warned me not to leave any plants outside or they would be gone by the morning.   Early last evening I spotted them poking around the row of motorhomes in front of us but by the time I got the camera out they had moved on.

The tailings and huge pit of the New Cornelia Copper Mine dominate the town.  Its closing in 1983 was a major catastrophe for the town, it was the only employer. 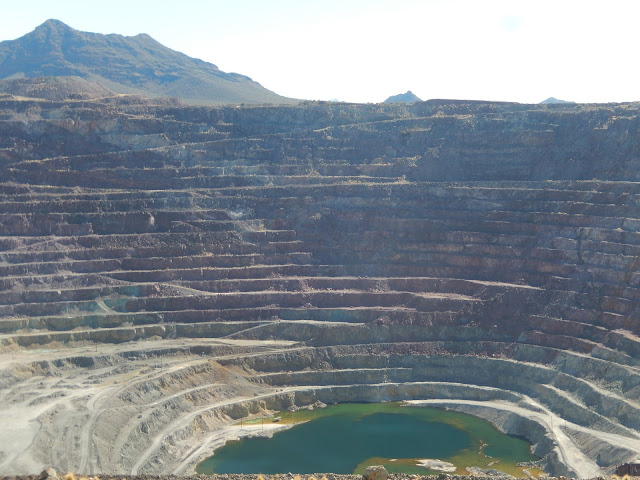 We drove up to the mine pit overlook this afternoon and met an old timer (86 years old) and former mine employee who runs the tiny mining museum there.


He was full of stories and was happy to share his information and feelings.   He feels the mine can be reopened again in the near future, with this new president.
The ore is still in the ground, waiting to be uncovered. 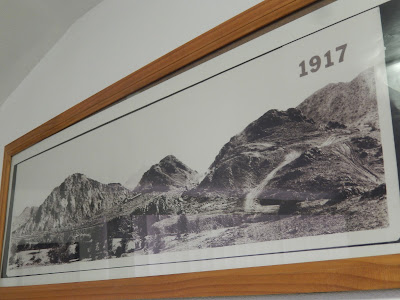 Inside the museum he showed us pictures of what the land looked like before the open pit began.  The three mountains peaks in the photo above stood where the gaping 1 1/2 mile wide, 1200 feet deep hole now waits.     This area has been mined since the 1500's he says, Indians worked surface veins of copper for dyes they contained and the Spanish began to dig shafts for gold and silver in the 1700s.

This next photo is just for Pam.....what do you think about this crested Pam, have you seen it anywhere? 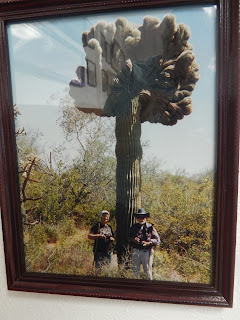 He showed us other things that have come from this mine, other rocks and minerals and....a number of varieties of turquoise, one in particular was of interest to us.    He says there is no more available anywhere, but now I'm on the lookout.      Our first company was named Papago Plastics! 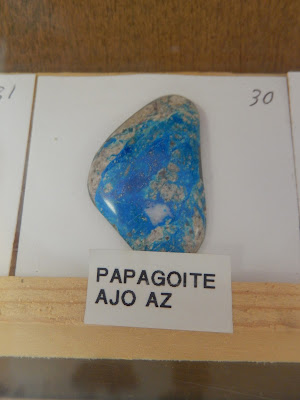 After the museum we took a scenic loop road, a dirt road really, through the beautiful green desert and back into Ajo past the colorful mine tailings. 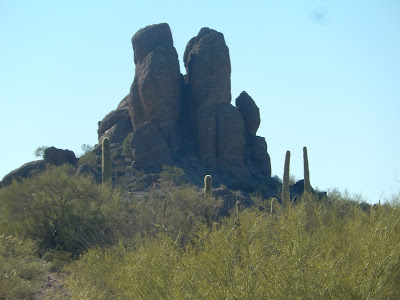 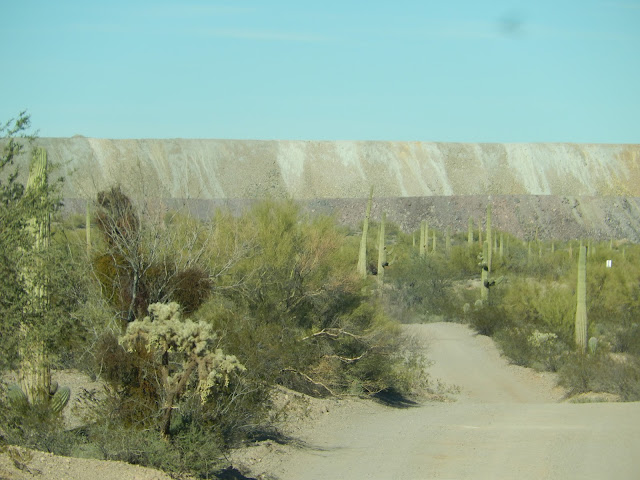 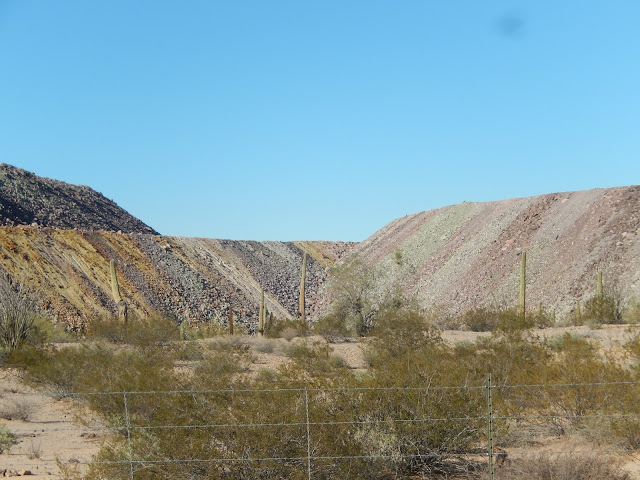 One area of Saguaro's seemed to be particularly fertile!   I don't think I've ever noticed such prolific growth. 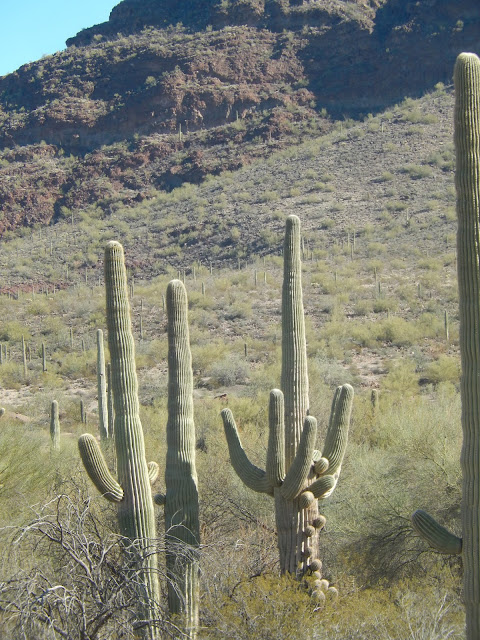 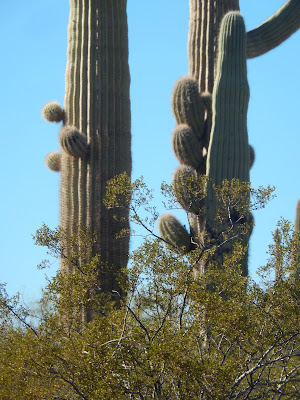 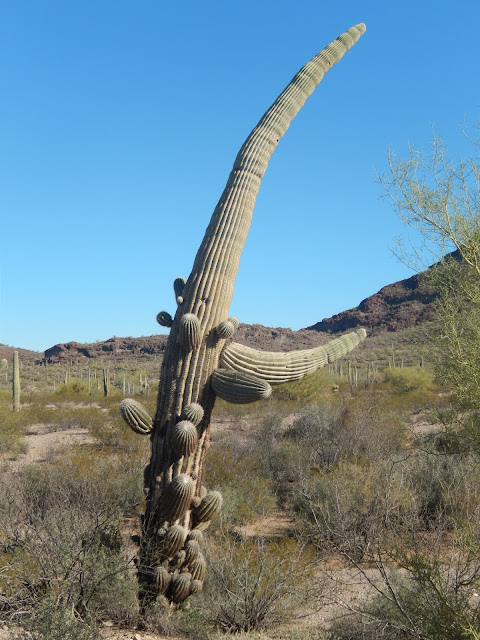 Yesterday we drove south, through the even tinier (is that a word?) town of Why and into the Organ Pipe National Monument.   The town is at a Y in the road, hence the name.......

Pam told us to make sure we got the "not so Junior ranger" booklet so we could find all the crested cactus along the main drive.    We saw at least 5 on the way to the Visitor's Center and then, with the help of the booklet, saw many more we would have surely missed. 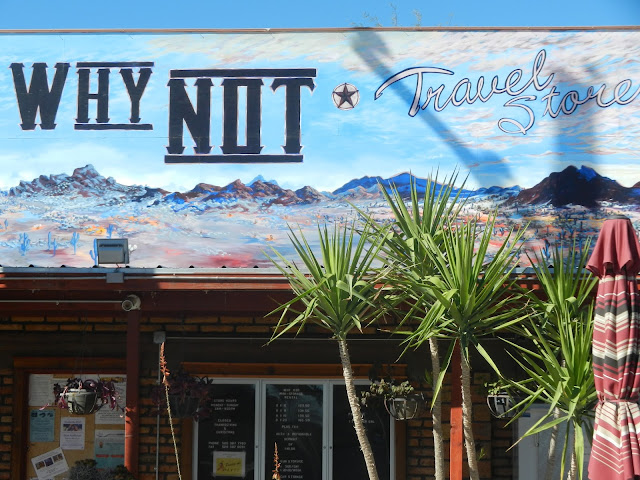 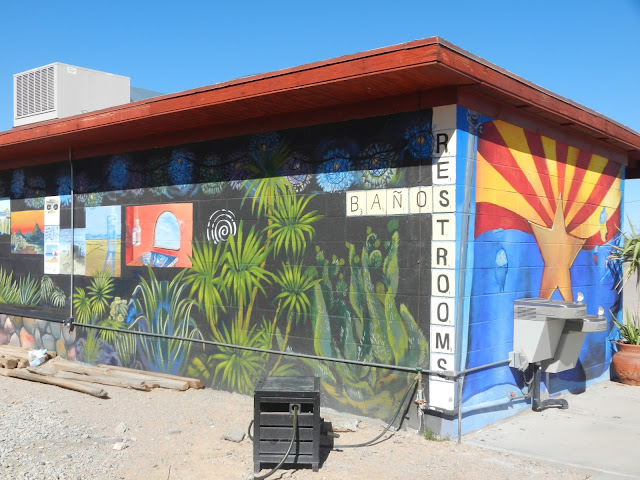 If you're not interested in seeing any more cactus, now would be a good time to stop reading. 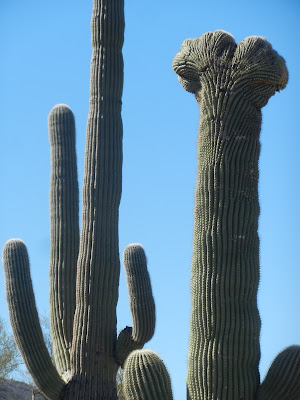 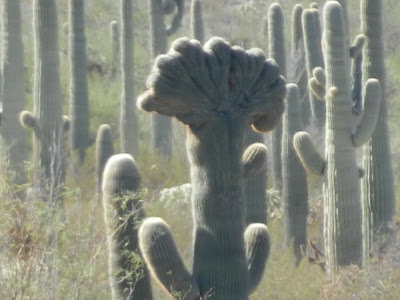 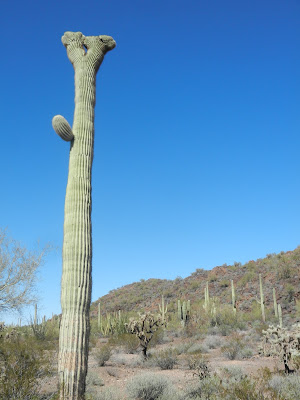 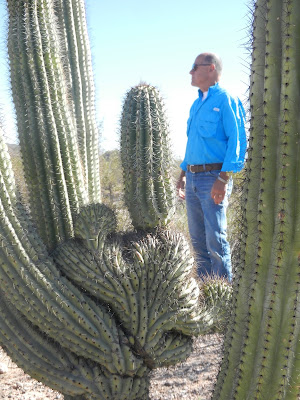 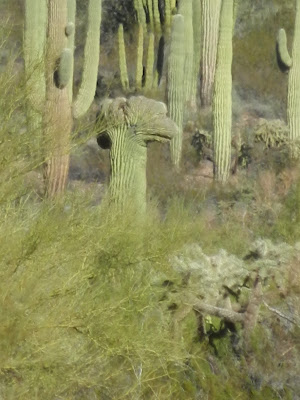 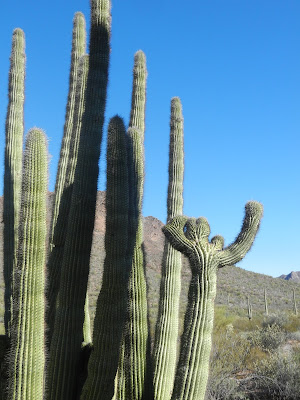 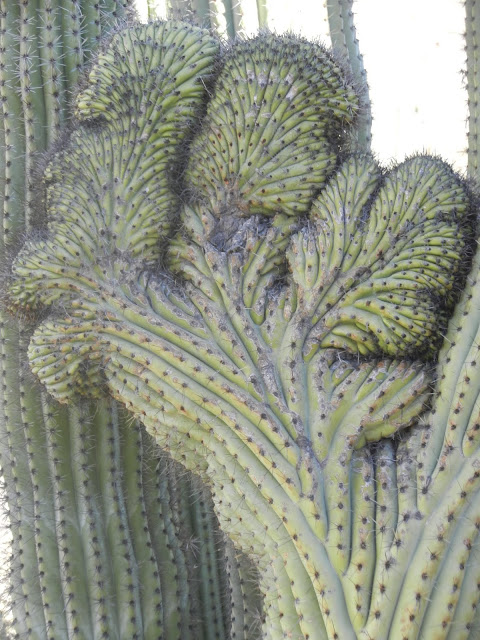 At the visitor's center we were given another booklet that would tell us about the landscape through which we would drive.   The types of plants we would see, the types of animals we may see, the reasons why things grow where they grow and a bit of the history of the Sonoran desert and this park were in the little guide.   Lots of information.  I tried to keep track of each point and read about what we were seeing, but eventually gave up and just enjoyed the views.    I read it later, at home. 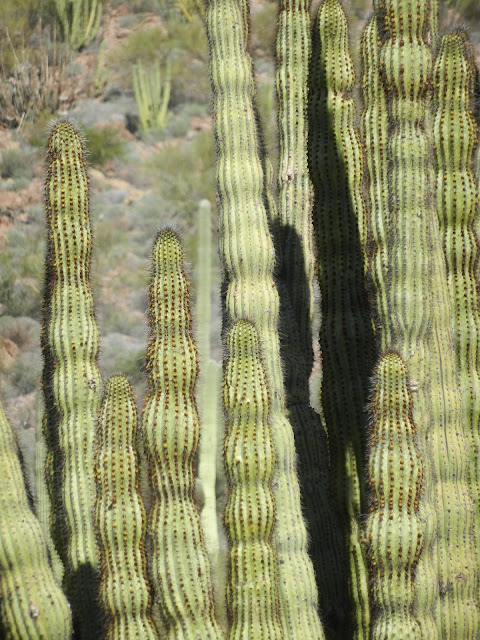 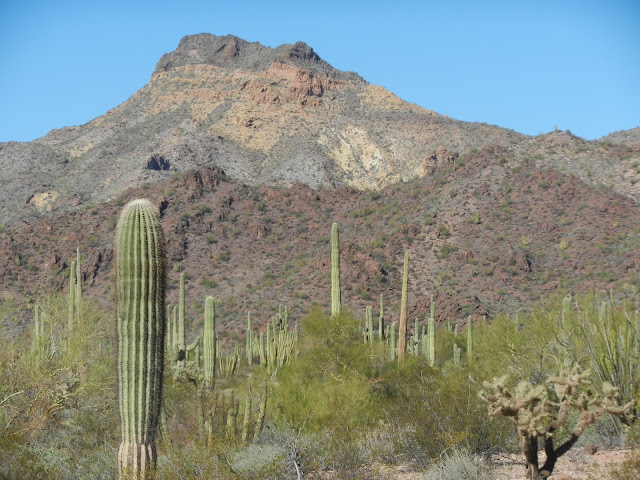 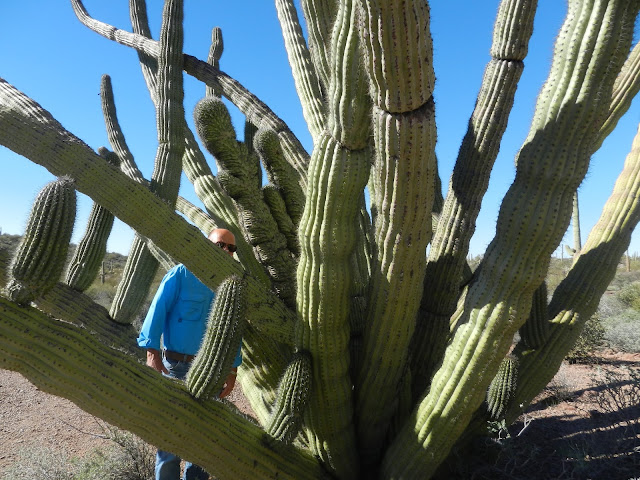 We're off to Naco in the morning.    Pam and John are there already, waiting for a week of golf!
Posted by Suzi at 11:47 PM