The plan today was to go into Pensacola, have a seafood dinner for lunch then head to the Naval Aviation Museum.    On the way to The Fish House we drove through some really interesting old homes and brick buildings so while we ate lunch we decided to alter our plans and just meander through the Historic District, one of the first settlements in the country.

Plans changed again....we were just too close to the Gulf to turn our backs on it.    Instead of strolling through history we took a road leading to Santa Rosa Island and the Gulf Islands National Seashore.  For the first few miles we drove by the usual tourist attractions, tiki bars, t shirt shops, stores selling shells and floaties, jet ski rentals, high rise hotels hiding the beautiful view, but gradually civilization dropped away and mother nature returned. 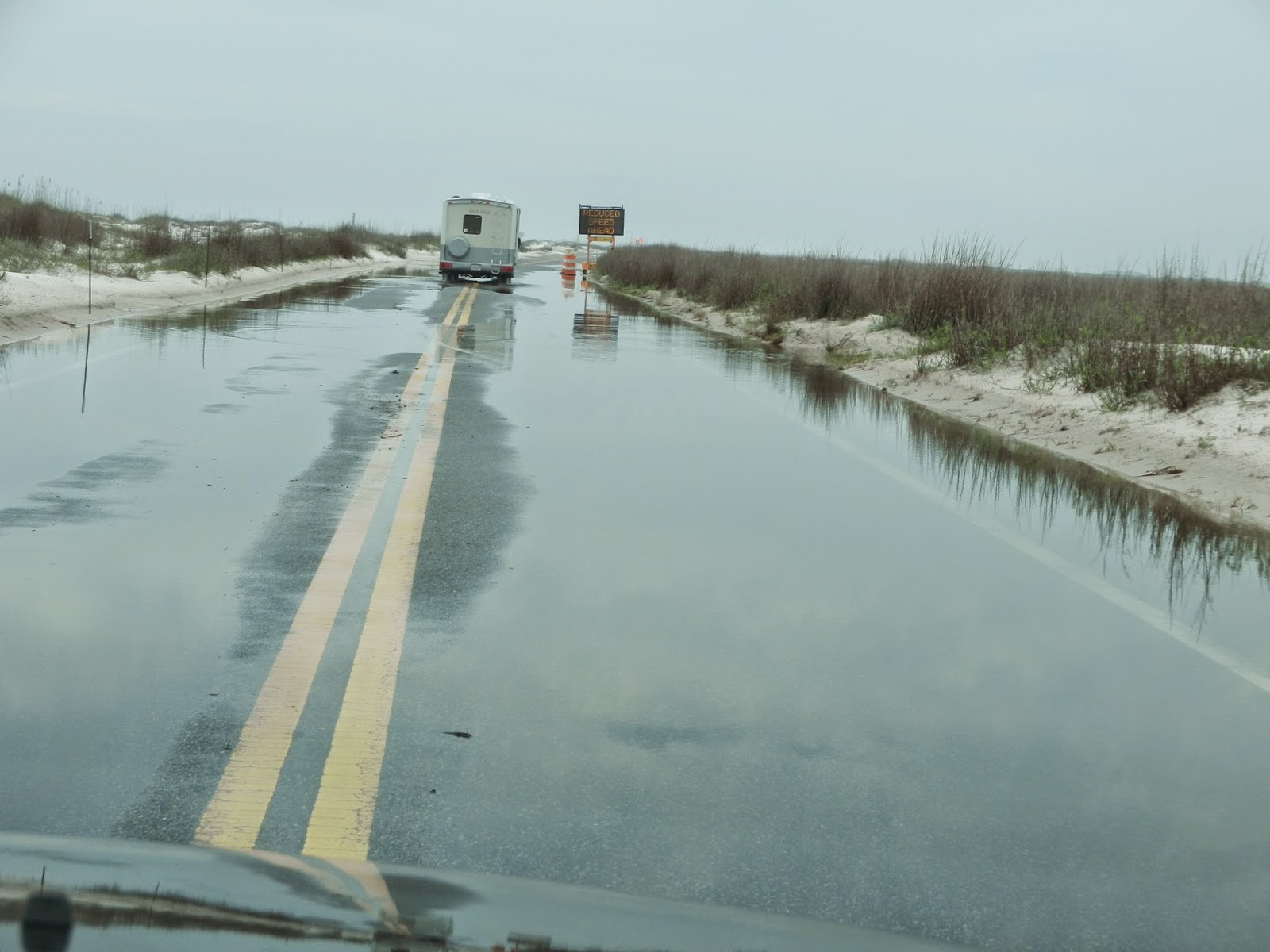 The fact that the road ahead was still mostly flooded made no difference to us.   We passed through the Ranger Station (without paying, thanks to our National Parks Sr. Pass) and nothing was said about impassible roads, so to the beach we went. 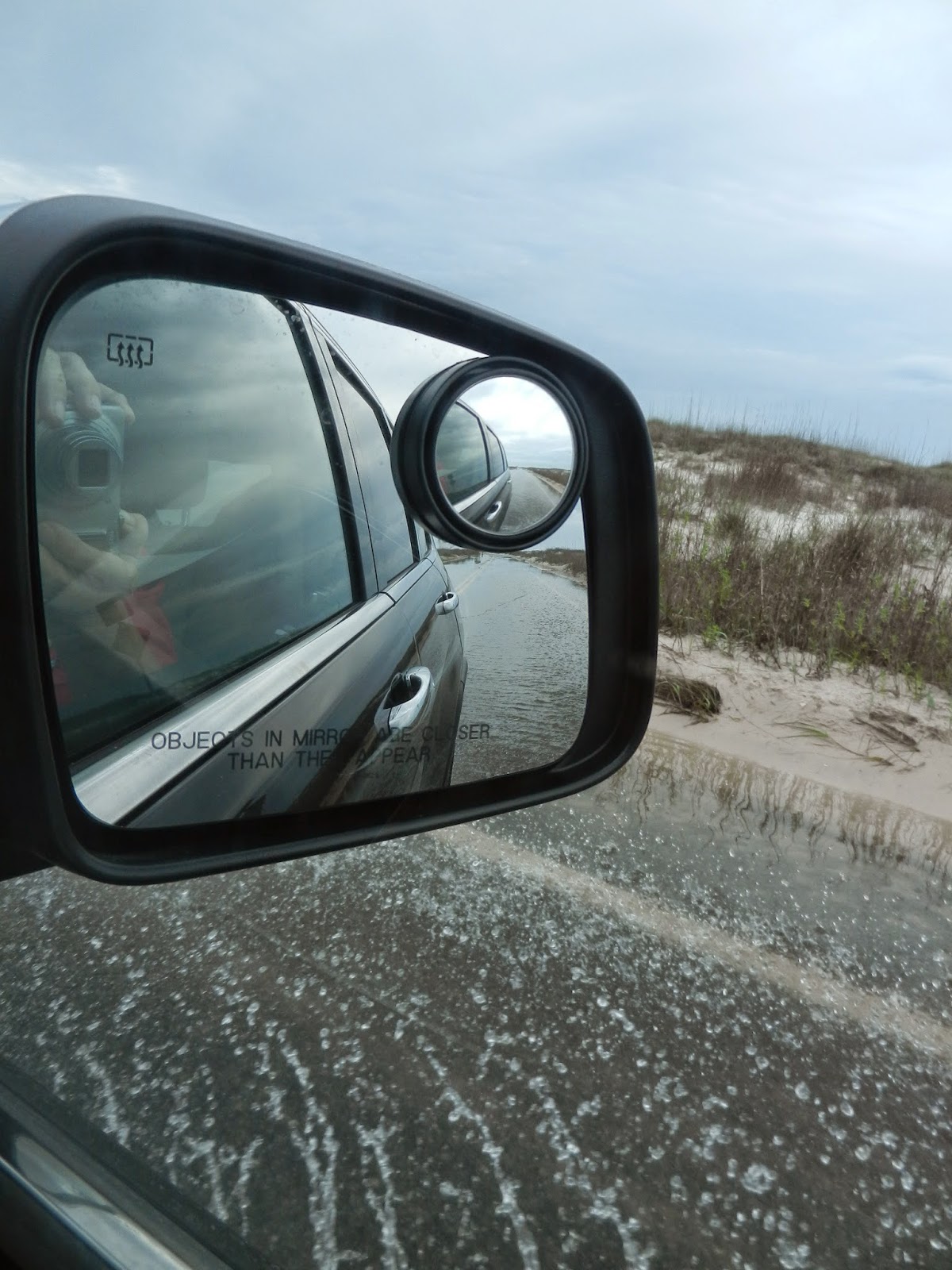 We made our own wake in places, but the jeep handled things well, and we stayed dry inside.   We did pass a fool who tried to make a three point turn using the shoulder (sand) and was stuck across our lane with his front wheels buried to the frame in the wet stand. 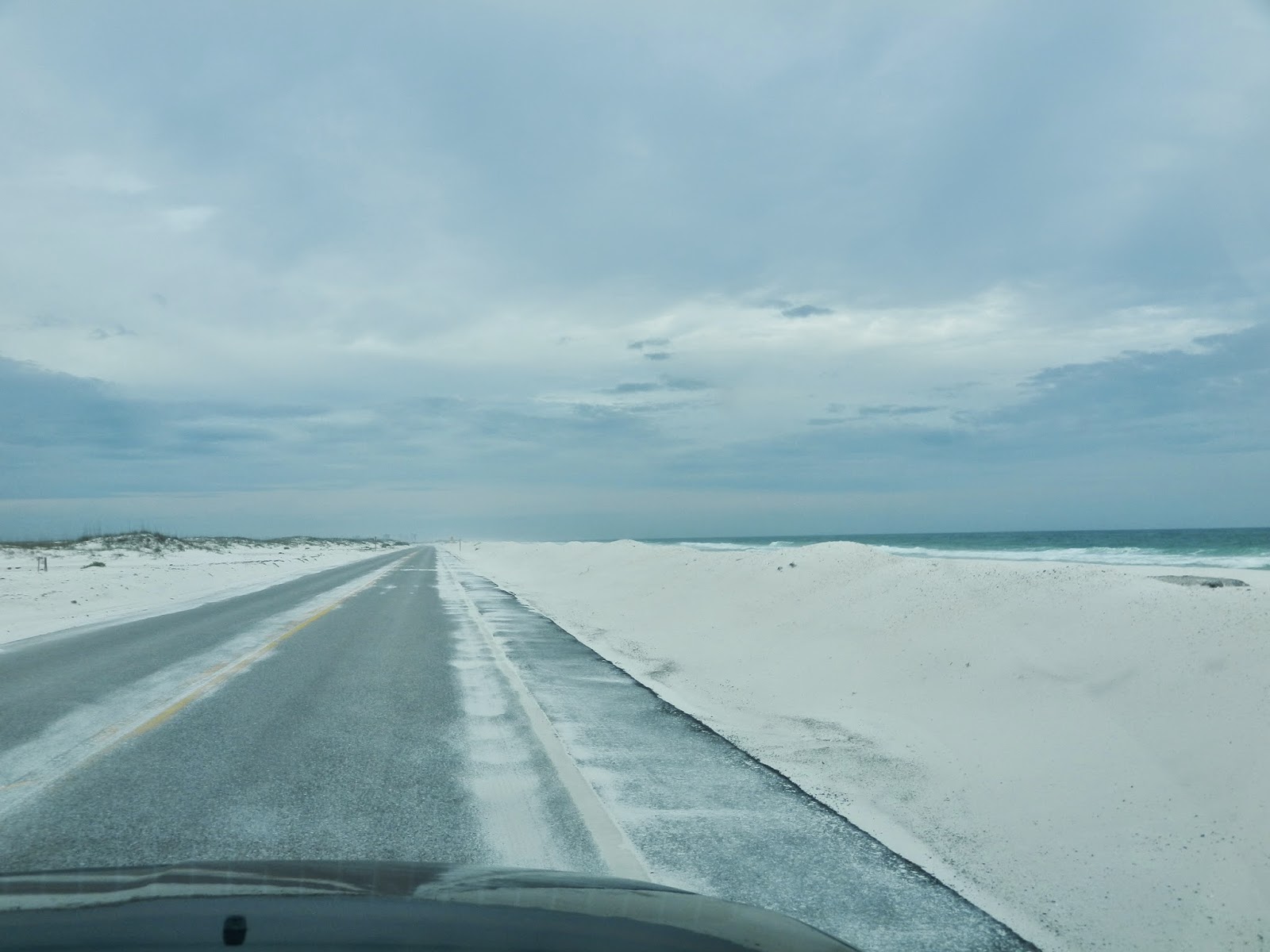 The further we went, the less we saw.....just the road, the sky, brilliant white sand and water everywhere.     We could almost forget how busy the surrounding area really was.

We saw a nice campground with sites well spaced amongst the stunted coastal trees and bayous of the island.     The trees held many occupied Osprey nests.    Looked like our kind of place, perhaps next time.

We walked along the beach for awhile before continuing our drive to the end of the Island.

As we neared the fort we began to see large natural looking hills in the otherwise flat landscape.   We discovered they were purpose built hills, they contained old armament bunkers, part of Fort Pickens. 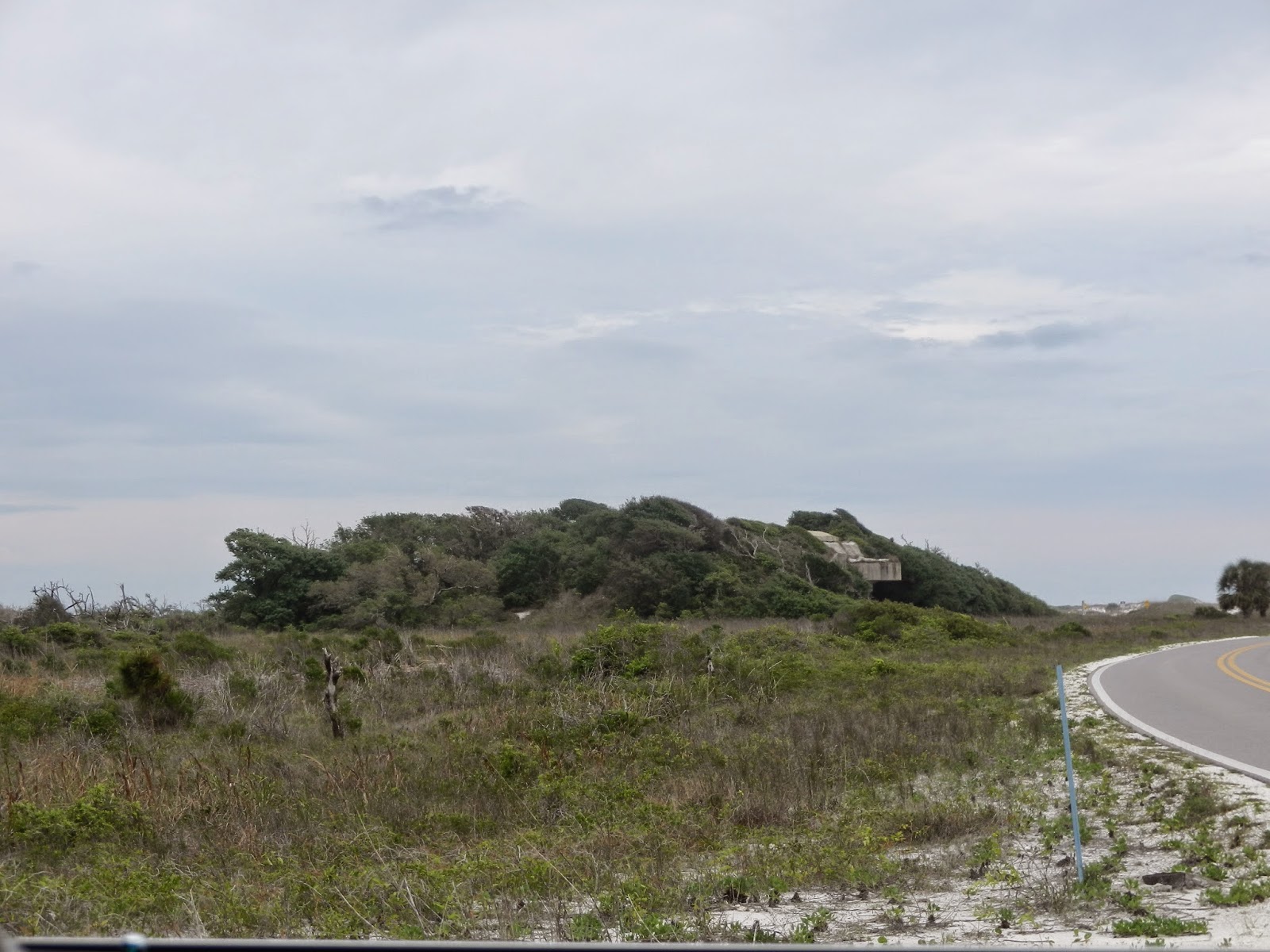 When we finally arrived at the Fort proper, we saw more buildings that were not "hidden".....
Weather began to close in again, so we just drove through.   I'm sorry John, we didn't visit the museum or read much about the Fort's history.  We simply enjoyed the views and before we knew it it was time to head back.    I'll read about Fort Picken's history later, you can too if you're interested. 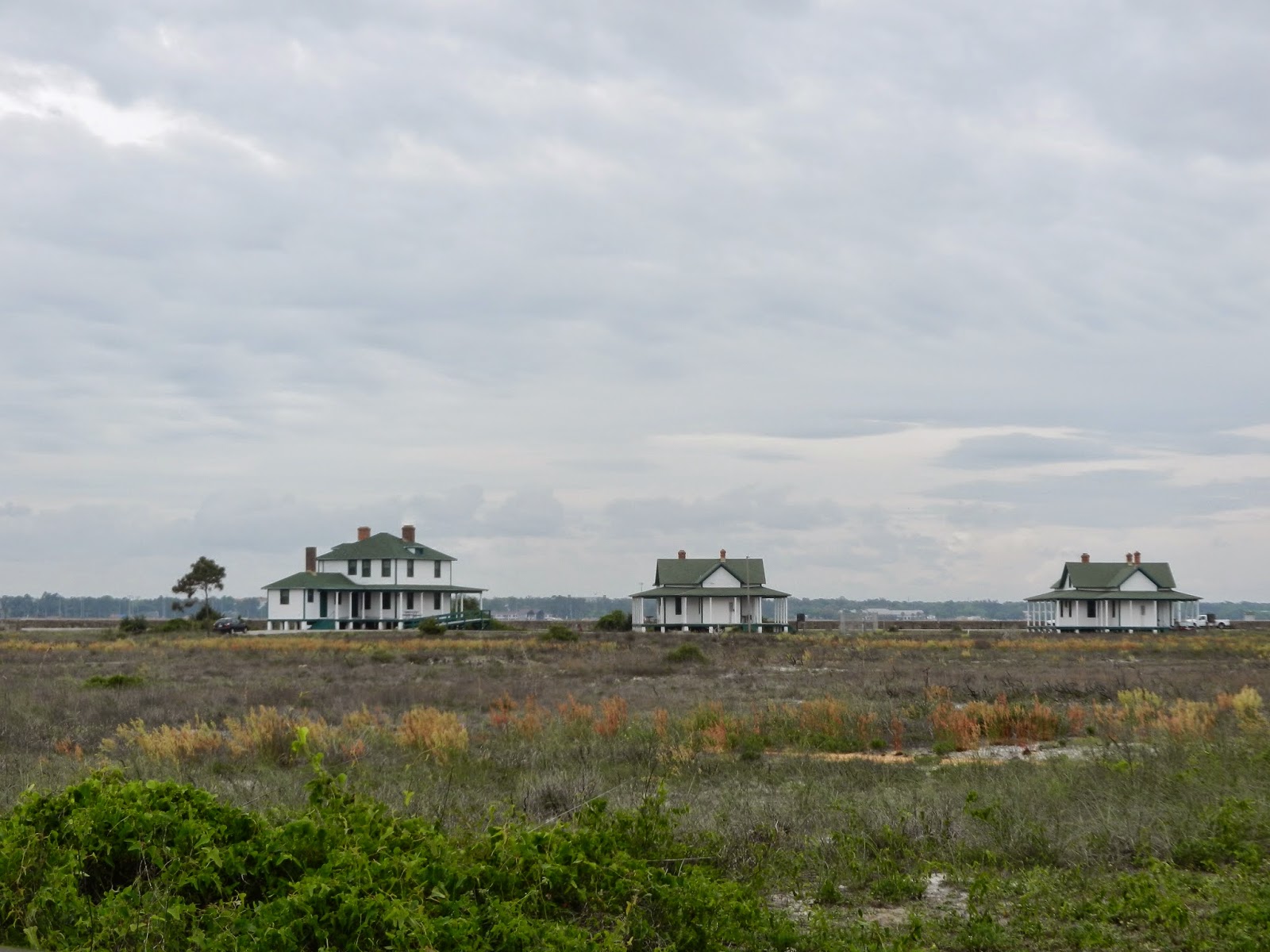 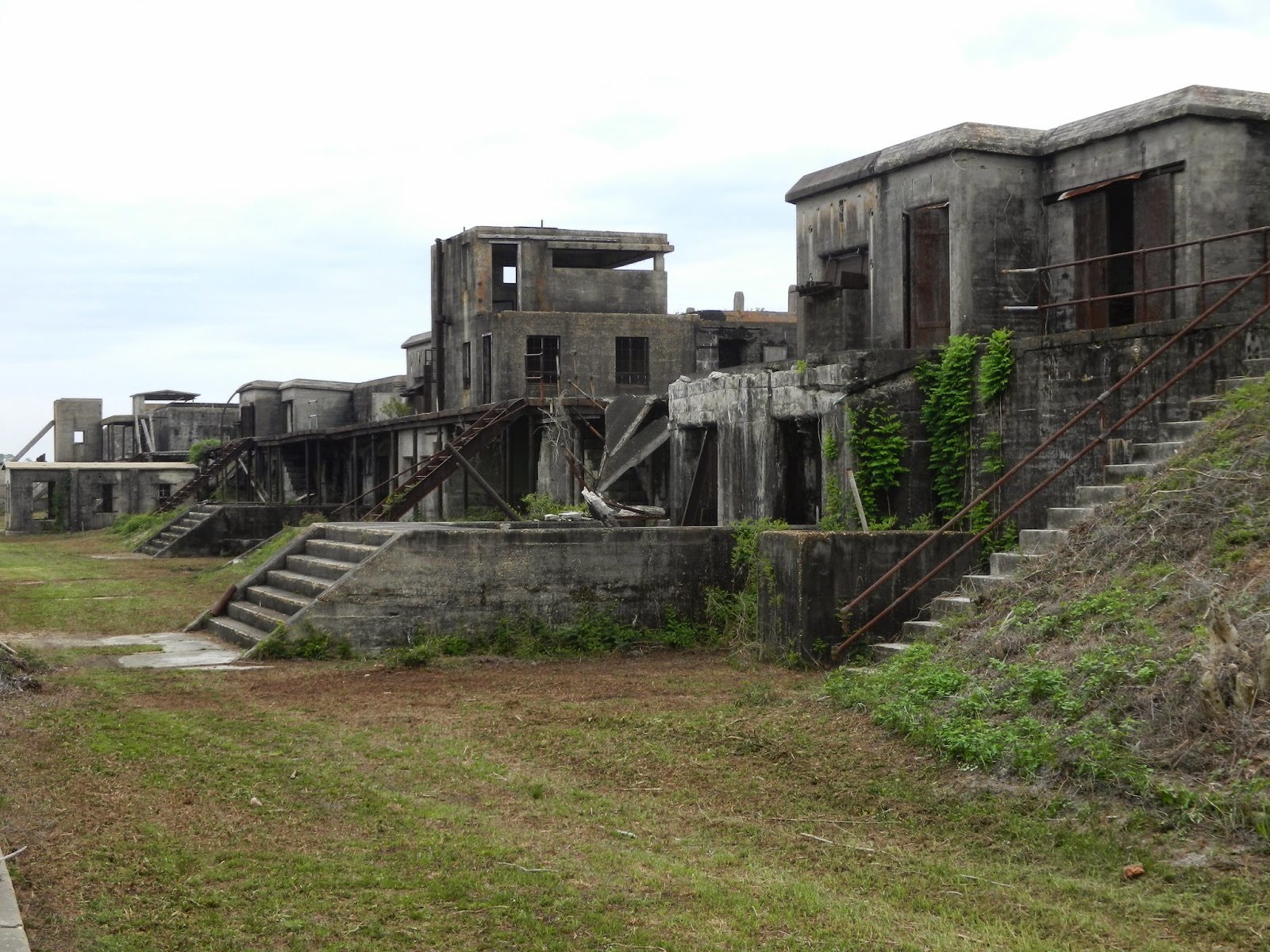 Tomorrow we'll really go to the Naval Aviation Museum......Once again the weather radar is not our friend.   Southern Louisiana and eastern Texas are under the gun.   We'll wait til things calm down (assuming they will.....) before we drive across them.    We're actually having a blast finding interesting things in unexpected places.   The joy of this lifestyle.
Posted by Suzi at 9:50 PM