Sasha's new staircase came and its working very well.     After Dave hurt his back twisting to catch the falling old lady, we ordered a set of folding stairs to make it easier for Sasha to get in and out of the motorhome.   Her hind end sometimes overtakes her front on her way down the stairs, often leading to a nasty tumble.

It took a week for the stairs to arrive, to send them overnight would have cost more than the stairs so we've been waiting.

They fold down into the size of a small suitcase and weigh about 25 lbs., (there are many other sizes) but when extended they allow a lower angle of descent/ascent with carpet for stable traction.   They will adjust to whatever height we need, can support up to 150 lbs. and can even be adjusted to help her enter the tailgate of the jeep.

It was a bit of a learning curve for the dogs at first.   Sasha still tried to race down the stairs before her hind end gave out.   After a few days she has realized that she won't fall and walks fairly calmly up and down.      Usually she comes down a step or two, stops and sniffs the air and looks around before continuing to the bottom. 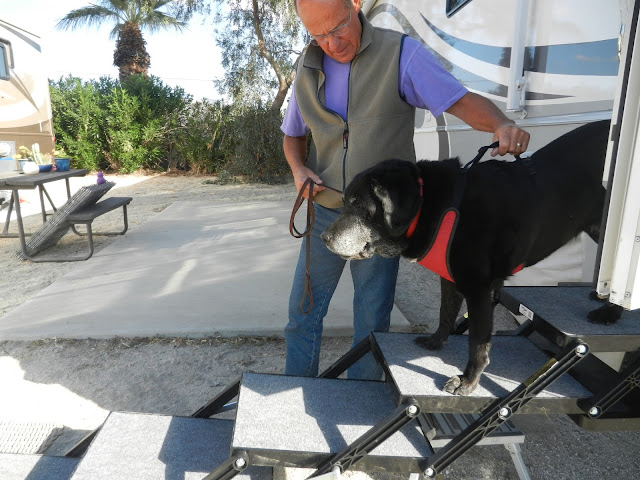 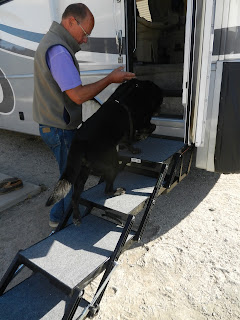 Lewis saw absolutely no need to use these new steps.  At first he simply jumped over the entire assembly as if it wasn't there.     After a few "training" sessions he agreed to use every single step, every single one until he reached the bottom...good boy. 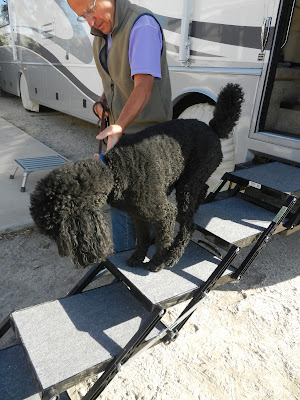 So, we're all happy now.   We still put Sasha's harness on before she goes down the stairs, just in case, but life is easier for her and that makes us happy.

The predicted wind did come up last night but we hardly felt it inside Beluga with her slides pulled in.   We slept like babes while it howled around us.  It was still very windy this morning when we got up so we left the slides in.   Its a bit crowded - we just call it cozy - but we are able to function in the reduced space easily. 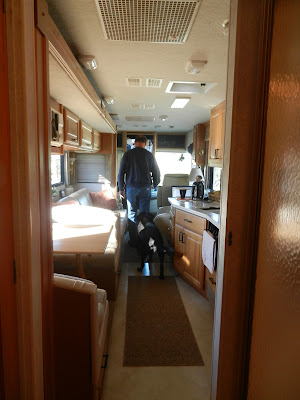 No precipitation came with the wind, but this morning we noticed a bit of snow on the distant mountain tops. 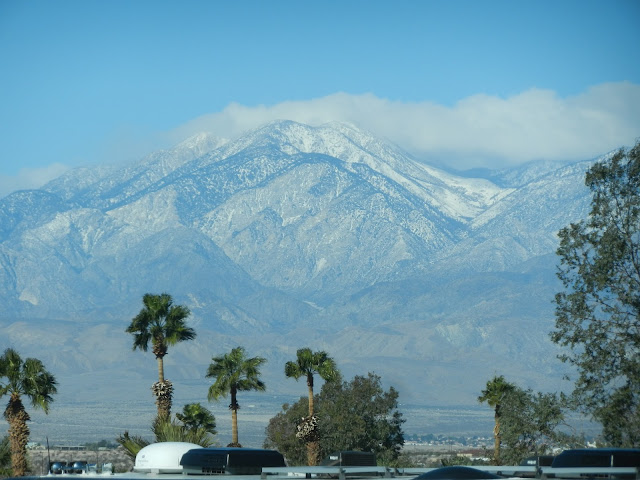 Since it was quite chilly and still very windy we decided to pick up a few groceries to refill the coffers before doing something more interesting the rest of the day.    Pam and John rode along, taking us into Costco on their card.   Before we knew it, the day was over and we had gone to five different grocery stores.  Its not that we're picky or anything.....each store had something the others didn't.  John and Dave were very good sports about driving all over the valley, but they will benefit from our purchases so don't feel too bad for them.    Costco, Trader Joe's, Jensen's Finest Foods, Whole Foods and Albertsons.   Wild Salmon, fresh flowers, gin, wine, wild blueberries, fresh ground almond and cashew butter, asian pears, pumpkin salad mix, Gorgonzola, just the staples...

Did I tell you how wonderful a date tastes when stuffed with almond butter?  Oh my.
Posted by Suzi at 10:53 PM