Excuse....internet here has been painfully slow and we haven't done anything that anyone would find particularly interesting.

We had a very quiet and low key Thanksgiving day, just the way we like it.  Macy's parade and the dog show on tv as I prepared the pie and prepped the meal.     We played 9 holes on the resort's course while the turkey breast cooked in the crockpot and the pumpkin pie cooled on the counter. 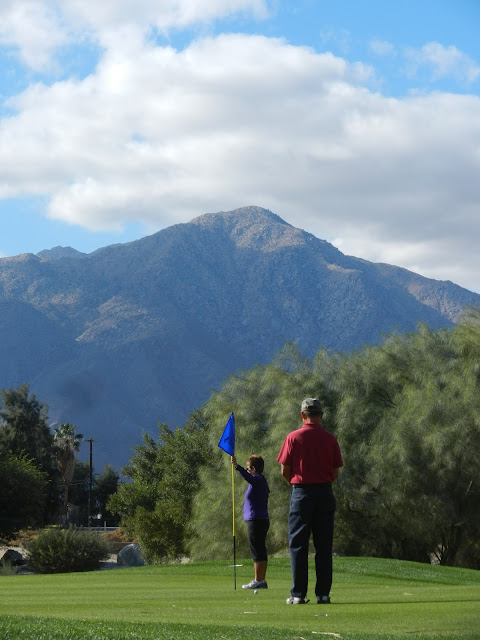 It was a sunny day, warmish in the sun, cool in the shade.   Dave had to wear long pants on the golf course, poor baby.

Friday, just as Dave got out of bed to take old Sasha out for her early (5:00 a.m.) morning constitutional, the rain started.    It rained lightly on and off for most of the day.     We drove over the mountain for a little autohike.   Julian must have had a Christmas celebration of some sort because the tiny town was jammed with people and traffic.   Families strolled the sidewalks with cups of hot cider, bundled against the 39 degree temps.   We continued on through Santa Ysabel (to buy a Julian apple pie at their other store) and back home in a big loop through the mountains.   I only took a few photos, the sky was gray, the clouds low.

This morning, Saturday, we were able to get outside for second cup.   Lewis spent his time on Dave's lap again....lots of people on bikes whizzing around.


Mr. and Mrs. Costa joined us, dividing their time between sitting on the ex pen and drinking from the hummingbird feeder on the picnic table.   They are very habituated to people and sit quite close, as if they want to hear what we're saying.

After lunch we took advantage of  twilight pricing for golf and played until dusk (it gets pretty cold when the sun drops below the mountains).

We've decided to extend our stay here one more week.   Golf practically right outside our door is attractive and we haven't spent much time really exploring the area because of the holiday and it's attendant horde of people. 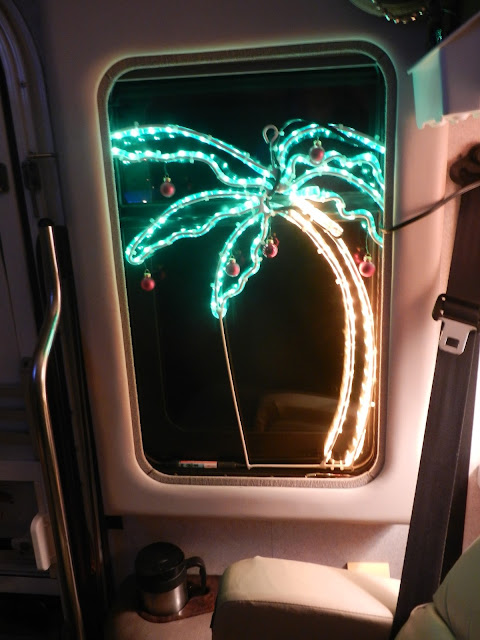 Today we hung the red balls on the window palm tree.....let the Christmas season begin!
Posted by Suzi at 10:23 PM