I decided to give my nervous system a little workout yesterday and agreed to ride up the scary road, aka Horseshoe Meadow Road.    A very benign name for a really jiggy road.

I took no pictures on the way up, that's the hard direction for me, who knows why.

The road isn't dirt or as narrow as it appears from below.   It is a relatively wide, two lane,  paved road with only an occasional rock in the middle of the lane to remind you of the loose rocks, dirt and boulders poised over your head.  Originally, this road was put in to service a proposed Disney Ski Resort, but that resort was never built because of the Wilderness Act which prohibited built structures within a Wilderness area's confines.    At the top - Horseshoe Meadow - there are several campgrounds and beautiful trails.

We stopped near the top at a pretty little waterfall.   I was surprised how cold the air was, we didn't spend much time there before we headed back down. 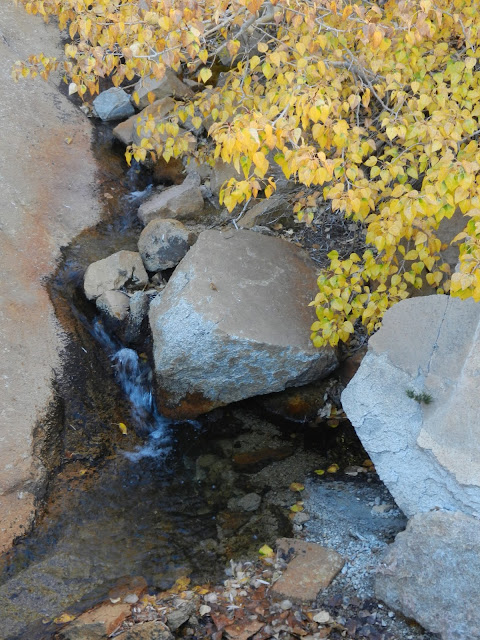 The trees at the top reminded me of the ancient bristlecone pines we walked among near Big Pine, CA. 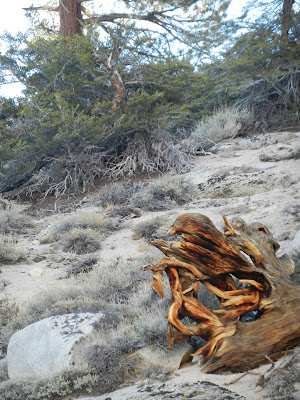 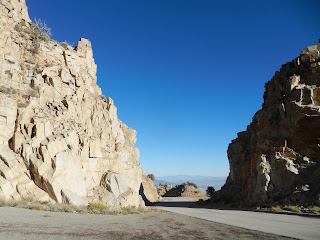 I was able to enjoy the astonishing views on the ride back down.  It was hard to fathom the distances.   Ultimately, I'm glad I conquered my fears (for this road anyway) and rode to the top.

Today, our last day here, dawned clear and bright but very, very windy.   We had planned on playing one last round of golf but quickly realized that wasn't going to happen.

Good old Sasha...she loves to lay on her bed outside.   She likes it when we're out there with her for second cup or happy hours, but if not she's perfectly happy alone.    When she wants to go out there, she stares at us pointedly.   If we don't see her, or pretend not to see her she begins to produce soft woofs that ramp up to a very large bark.   When we put her out, she sniffs,  watches the world go by, then puts her head down and dozes.    Today was no exception, except that we didn't go out with her, we don't enjoy whitecaps in our coffee.    She is unflappable.   The ex pen in which she was sleeping blew down around her with a great crash, first the front half, then the back.   She slept on....  Dave finally went out and made her come back inside.  She would have made a good guide dog, nothing fazes her.   Well, except thunder.

I spent some time doing a bit of planning and campground reservations for the upcoming few months and then we ran out for a few groceries that I needed for dinner tonight. 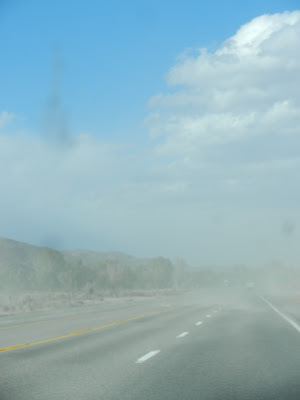 The wind was kicking up clouds of dust that, at times, made me think I was in a blizzard.     Accuweather, once again, failed to see the wind here.   It told me that the wind speed was 8 mph, when in truth it was closer to sustained 20 mph and gusts nearing 40 mph!

Heavy, white clouds moved up and down the Sierras, their wispy tops blowing in the strong winds.   The sky above all this was still that brilliant, deep blue.   We hear that the mountains are receiving heavy snow and just a little north of us in Lee Vining and Bishop people are dealing with flakes....time for us to head south!