I had a good phone conversation with dear friend Barb Sullivan yesterday.  She ended the call by saying "I wish you guys were here, no...I wish I was there".  That just about sums up our feelings, in reverse.  We wish you all were here, We don't wish we were there!  Especially with "Sandy" on her way...

The big bus was rocking today, Rock and Roll Friday survives Dave's retirement.  Thanks to the Sirius satellite radio, Dave was wailin' to 50's rock and roll as we moved on down fabulous 395 toward Lone Pine. 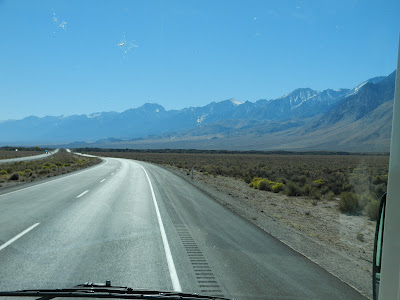 We continued through the long, broad Owens River Valley with the knobby spine of the Sierras snaking along on our right and the Owens River,  the White Mountains, then the Inyo Mountains on our left.  We drove through varied lava fields and began to see the odd brown formation called the Alabama Hills crowding between 395 and the Sierras.

Although we only drove about 60 miles south of Bishop, there is so much here to explore. Mt. Whitney is the highest point in the contiguous United States  (14,508 ft above sea level)  and just a mere 100 miles to the east of us, Death Valley has the lowest elevation (282 ft. below sea level) in the country.

Once again, we go to bed dreaming of the day to come.
Posted by Suzi at 10:01 PM