Our last long exploratory drive of this part of the trip.  We're in Florence, Oregon, sort of mid-way on the coast.  We drove north on 101 to Newport and today we're going south on the same road towards Bandon.  We've decided that after we leave here on Wednesday, we'll go inland into California, past Shasta Lake, and then through the Sierra's into the interior of the state on CA 395 (right Tom?).

We took lunch with us and ate it below the Umpqua Lighthouse overlooking the jettys on the Umpqua River and Pacific Ocean.    I could see a beautiful, empty beach in the distance and I really wanted to find it to let the dogs stretch their legs.    We drove around a bit until we found the road that led to the deserted beach. 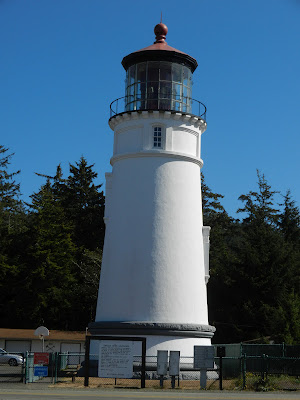 Not a soul on the beach.  Miles and miles of white, drifting sand, waves and driftwood.  Perfect.  The dogs really enjoyed their free time.  Sasha ran around  with complete abandon,  then settled into her usual routine of carefully sniffing every blade of beach grass, shell and piece of driftwood, large and small.  Lewis got a bit fractious at first and knocked her down a few times before Dave found a stick to throw to channel his energy.   We've trained them to come instantly when called on the beach, and Sasha has it down pat!!!! 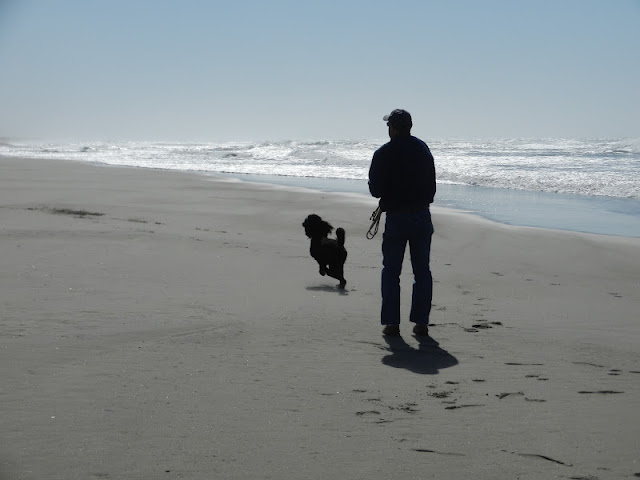 Sasha never does anything wrong.  She ranges a little way from us, but always trots back in a few minutes.  I keep an eye on her wanderings, make sure she isn't getting into trouble.  Well, usually.  Today, she was taking longer than usual on a piece of log that the sand had drifted almost completely over.  Then I saw it...

She dropped her shoulder.  Dog people reading this know what that means....I screamed at her and she popped up immediately, no hesitation, so it wasn't as bad as it could have been.  It wasn't a log.  I put both dogs on a "stay",  walked over to the spot and looked down.  Whiskers, teeth, forehead, ribs....Hmmmmm  not a log.     A dead seal.


Ah well, no harm done.  It looked like it had been in the sun for quite awhile, so no smell.  Whew, that was a close one.  Now all we had to do was keep Lewis from picking up one of the jelly fish that were washed up in the surf.  Empty beach, indeed! 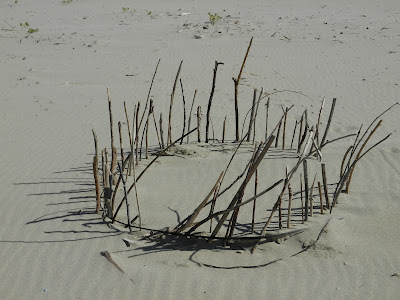 After our beach walk we continued  south on 101, still aiming for the little town of Bandon.    It was already 3:30 when we passed through Coos Bay, not a pretty town let me assure you.  We both decided to call it a day and head back instead of pushing on further south.  We were tired and it was a long way back.  No sense in gilding the lily.  It had been a wonderful day and we were done.


After a slow ride back, stopping to check out Winchester Bay and a few State Parks on the way, we fed the dogs and went  into Florence for dinner.  We tried to get in to Waterfront Depot but the wait was too long, so we walked across the street to 1285 Restobar and had some good old fashioned italian comfort food.  Dancing With The Stars results show and bed, where does the time go?
Posted by Suzi at 12:37 AM