fun in the rocks - Tuesday

We had a really fun, really low key, really low altitude day today.  First we visited the Movie Museum and saw all the silver inlaid western saddles, fancy Roy Rogers and Dale Evans clothes by Nudie, various props, scripts and posters  from the hundreds of old Westerns that were filmed here in Lone Pine.  As a matter of fact, lots of movies and TV shows used the Alabama Hills a backdrops, Star Trek, Gladiator,  Gunga Din, Twilight Zone, Tremors, etc.  We even found out that the terrible Whitney Portal road of yesterday's post was used in the classic movie The Long Long Trailer with Lucille Ball.

The Museum triggered funny memories for both of us.  As we drove through the Hills looking for various movie sites, we talked and laughed about our young lives.  We would have had gun fights if we had known each other when we were little.   Dave had twin holsters for his six shooters, a big cowboy hat and a spiffy Western shirt.  He told me that all the while he watched Roy Rogers, he sat on the arm of the couch and pretended it was his horse.  When the program was over, he would race out and throw a leg over a perfect lilac branch and ride into the sunset.      I was Annie Oakley with my white cowboy boots, fringed shirt/skirt outfit, hat hanging down my back and six guns on my skinny hips.  I, too, would ride the couch arm and we both made the same gun shot noises!!!!  Too funny.

We found a nicely graded wide dirt road named "Movie Road" winding through the Alabama Hills and followed it for miles, marveling at the rock formations. 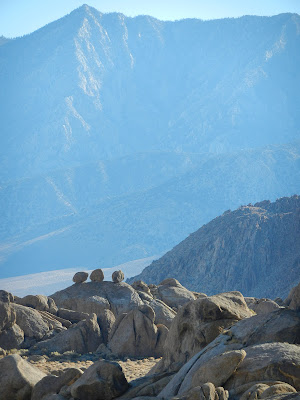 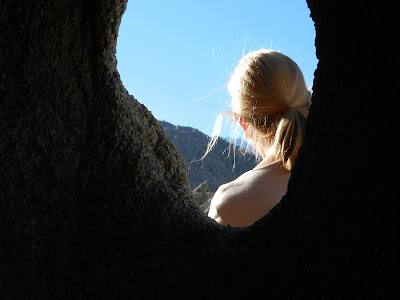