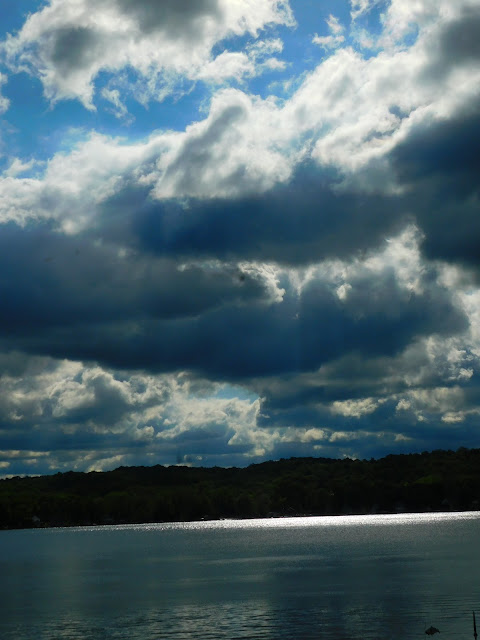 I can hardly believe it's July already.    Summer is moving by quickly, I'd assumed it would drag with the restrictions on our socialization and explorations.   Not the case at all. 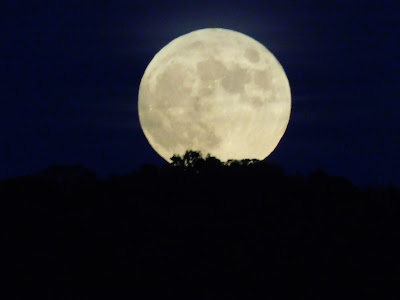 As I've said before, nothing new or very interesting is going on.    Our sweet Lewis turned another year older, he's 11 now. 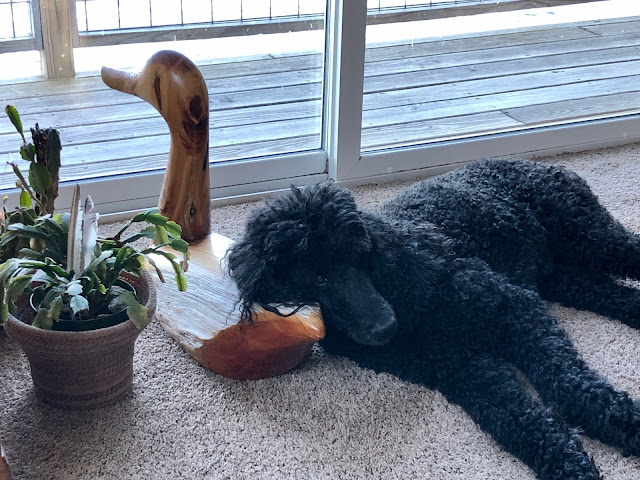 The birthday didn't seem to bother him but he has slowed down a bit in his old age.   He still enjoys swimming (if someone will throw in one of his toys to retrieve), fishing with Dave, supervising any and all work, attending second cups and happy hours and just generally relaxing in the air conditioned house.    The temperatures have been unusually high this week (mid 90s) and have arrived with sticky humidity levels so indoors is the most comfortable place to be.

Dave swims often but, since there is no shade out on the water, I don't while it's this hot.    Lewis never enters the water when one of us is swimming.   He feels someone must stay vigilant in case someone begins to drown.

Our Jeep continues to perform it's new roll of construction delivery vehicle and Dave continues his work downstairs in the emerging bedroom/bathroom project. 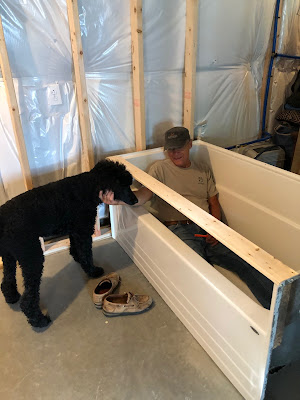 Last week was 4th of July.   Our lake holds a "Lake of Fire" celebration on July 3rd with fireworks and bon fires.   In the afternoon the lake is filled with boats cruising around and pulling all manner of floating things behind them.

In the late afternoon people have lawn parties and at 10 pm sharp, everyone around the lake lights red flares on their piece of shoreline to ring the lake in red.   It's beautiful.      This is the first time in probably 25 years that we did not participate.


The Town of Geneseo cancelled their fireworks display and closed the small park at the north end of the lake.    We this would be a quiet 3rd of July.    Wrong.     I think there were more displays than ever.   The booming and banging went on from early evening until way past our bedtime.   Lewis was not a happy camper and squeezed up on the bed between us, something he never does.

It's almost officially "Summer" and days move slowly.    Things are opening around us but we're staying still.     This is a time of reflection and learning and understanding.    A time of gratitude and happiness and sadness and disbelief. 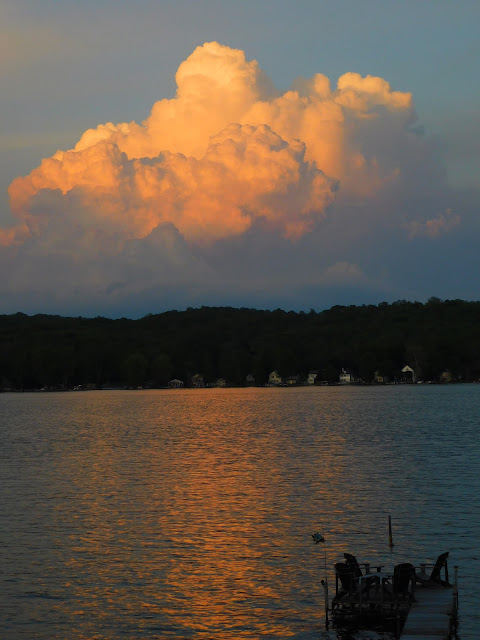 We've taken down our bird feeder.   The hummingbird feeder stays, they are polite visitors.   Grackles, squirrels and chipmunks took possession of the seed feeder and chased every one else away.    The chipmunks peppered the driveway with holes, the squirrels and grackles ate us out of house and home and those same grackles practiced one of their more annoying habits so enthusiastically that we had to wear shoes when walking on the dock.     They nest communally, lots of them in a small area, and the adults keep themselves busy by carrying their babies poop out of the nest (in their beaks) and dropping it into the lake.    That is to say if all goes well, it lands in the lake, but our grackles seem to be more intent on hitting the dock.   It's a mess.   No more food from us, ungrateful birds!


We have kept busy planning (with our familial architects) and laying out and building our downstairs project.     We're supporting our local lumber company and turning the Jeep into a delivery vehicle. 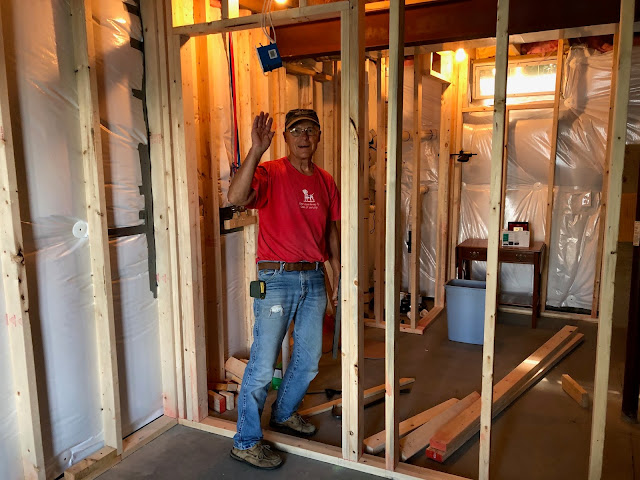 Dave has also kept up with his list of jobs in Beluga.   So far, he's replaced the toilet, and finished the leveling jack repairs.    On our way home this spring, Dave noticed that the fresh water tank was leaking badly.   We used bottled water until we could get home and investigate.   It turns out that the tank had become loose in it's compartment and as Beluga bumped along down the road (probably that d amn I-70 in Indiana again), the movement broke the pvc drain pipe, allowing the water to pour out.   All fixed now! 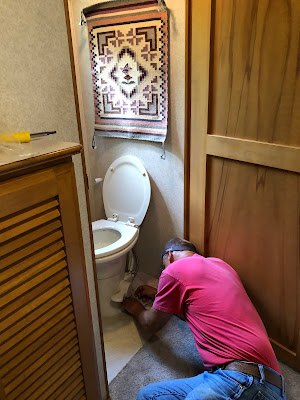 I'm still cooking and baking and being domestic.   Rhubarb season is pretty much finished so I've turned my attentions to cookies. I've managed to replicate one of our favorite Safeway cookies (Hope's Royales) and yesterday I made a batch of an old Polish cookie recipe that we'd forgotten about!

Niece Lisa stopped by the other day and brought us some goodies.....wine and flowers AND a huge box of Oliver's candies.     Oh my, they're good.   and, they're almost gone (don't judge - a friend says that covid 19 sometimes stands for the extra weight gained while staying at home). 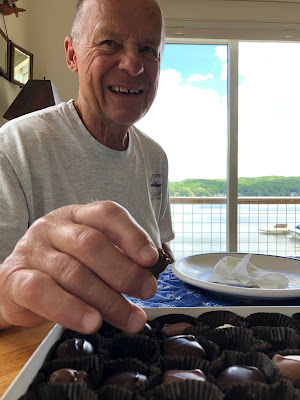 Lewis has been enjoying his time, just being Lewis. 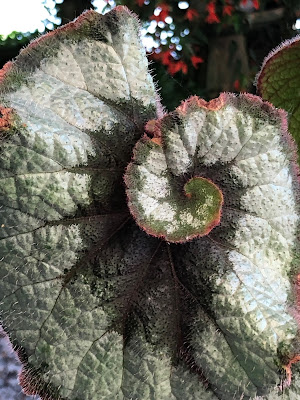 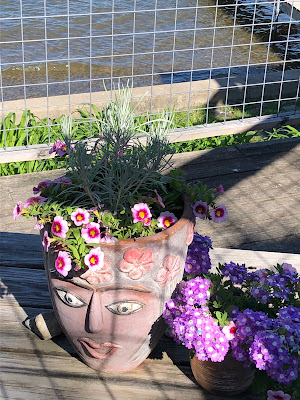 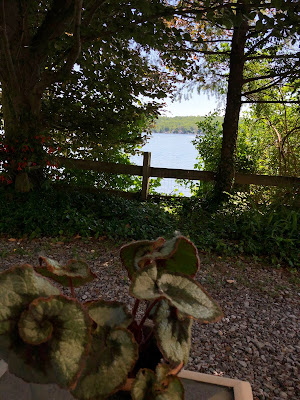 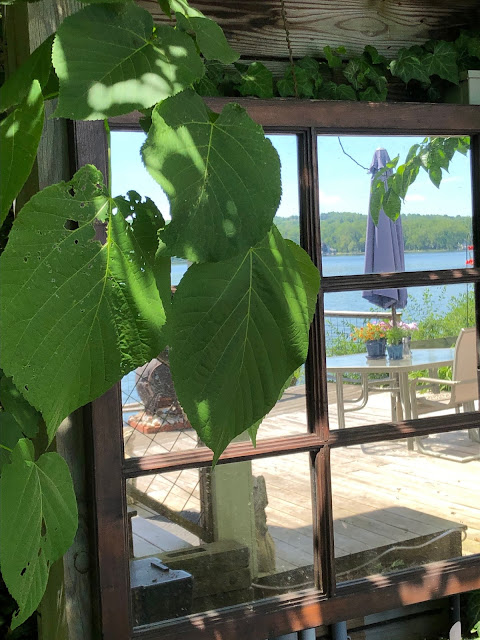 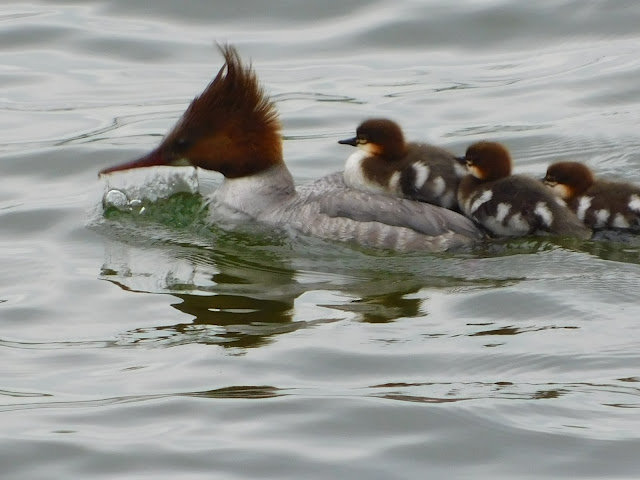 Life here at the lake

Not much new.   Probably won't be much of interest for the rest of our summer.   No friends visiting, no exciting explorations, no new restaurants.  Sounds like I'm channeling Eeyore......  The weather in Western New York swings between downright cool and cloudy (today) and very warm and steamy (later this week).    Life is peaceful and calm here, not a bad thing, just not interesting and exciting to blog about. 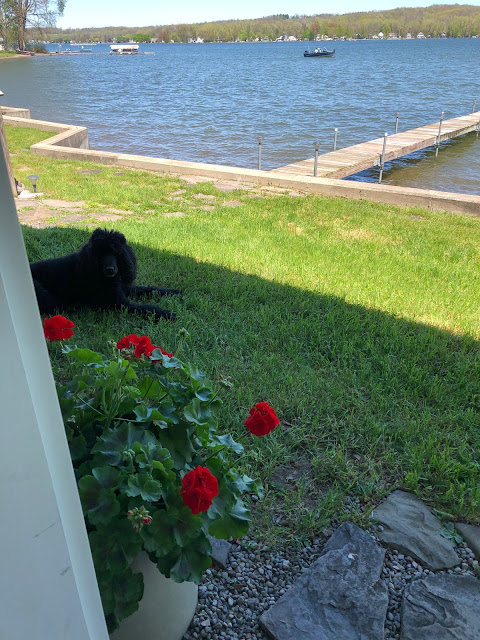 We've been brightening up things with a few planted pots of summer flowers, watching boats go by, reading, and doing a few projects around the cottage.


Dave built wooden valances over the windows in the living rooms to provide a bit of upward reflecting light in the evenings. 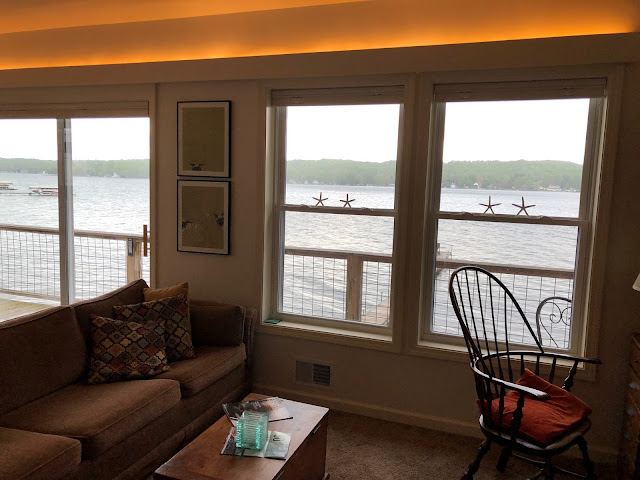 It's hard to get a good photograph of the quality of light they provide in the evenings, but we're very happy with this little project.

Our bird feeding station has been a huge success....so much so that the squirrels and chipmunks are stuffing themselves and we've even had nighttime raccoon raid. 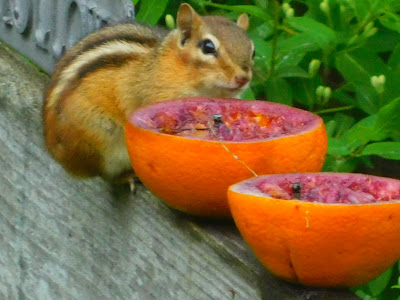 Our fly-in, seed eating friends become cross with each other when the seed levels drop dramatically. 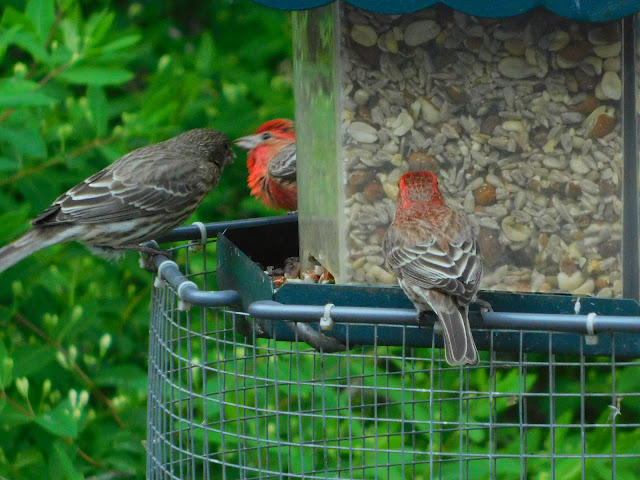 Dave is trying a new, natural, method to try and discourage these greedy guys.    He's attached thorny wild rose bush canes on the staff - we'll see if that makes them think twice. 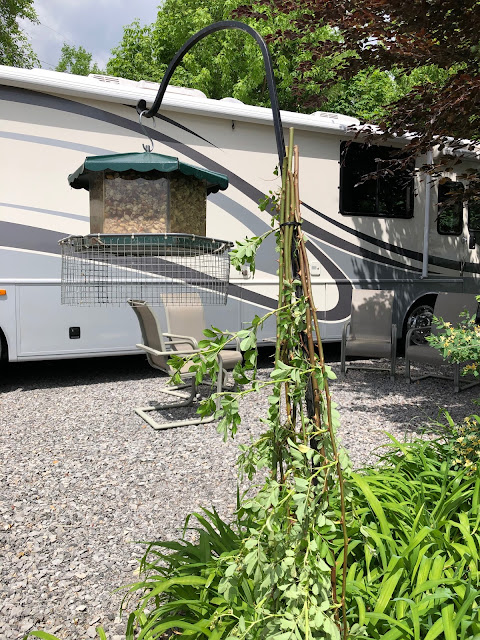 We've also been slowing working on turning one half of the lower level into a bedroom and bathroom.        Dave has moved his "work shop" to the other side and is now putting up walls.   I am, rather reluctantly, organizing, consolidating and making large "Good Will" piles.    Lewis supervises from the open doorway (while keeping an eye on the neighbor's new dog) 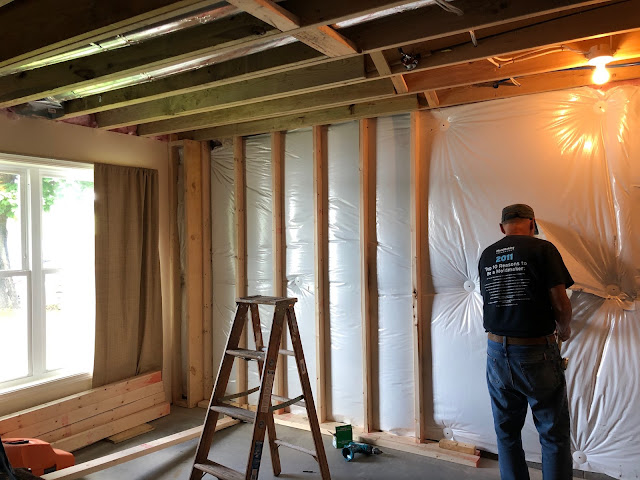 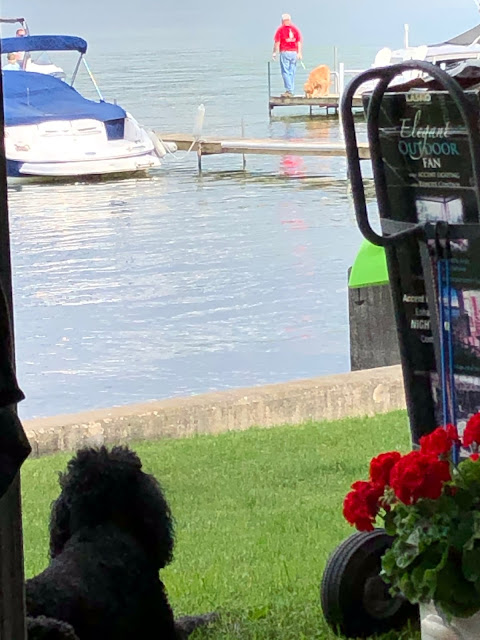 He keeps his distance lest we recruit his help.     One time we fooled him into coming in to help and then plopped him on the grooming table and mowed his wooly self.    Fool him once, shame on us, fool him twice, shame on him. 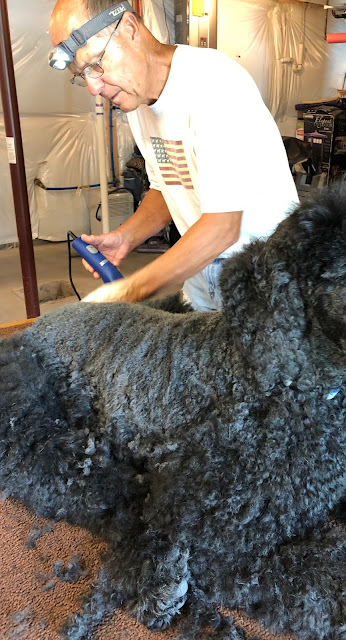 And then there are the "lake only" types of jobs such as vacuuming spiders from ceilings and windows and fishing out the huge Northern Pike that occasionally float up onto our little beach area. 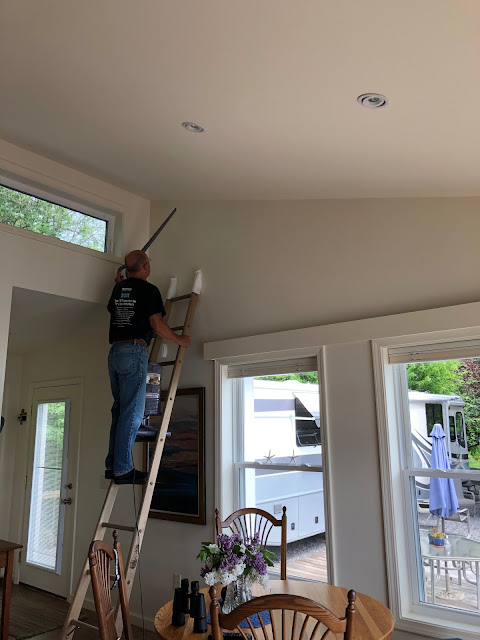 I've been cooking and baking a lot..    We figured out that I have made 73 dinners, in a row.   That doesn't count the lunches and baked goods.     I miss restaurants.

It's rhubarb season and Dave's favorite desserts revolve around all things rhubarb.    We used to grow a wonderful patch of it at the farm but since then I have had my sources nearby.    This year is different.    I resorted to buying some HUGE stalks at our local grocery store (which will remain nameless) a few weeks ago.   I should have known better but tis the season and Dave loves it so. 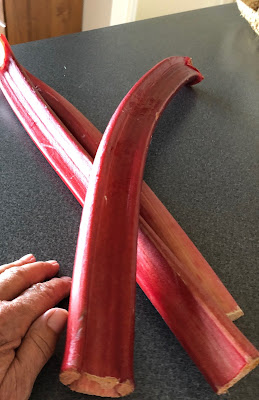 I made a crisp with it, no sense going through the trouble of constructing a pie when I pretty much knew how it was going to turnout.      Yep, the crisp part was decious but the rhubarb (cut into tiny pieces) remained as crisp and fiberous as if I'd made a celery crisp.   It went in the garbage.

But....dear friends came to the rescue with an armful of tender, freshly cut rhubarb and I made lots of goodies with it.    Crisps, upside down cake and strawberry rhubarb muffins.


Dave's birthday is tommorrow.....what new rhubarb creation can I come up with for his dinner? 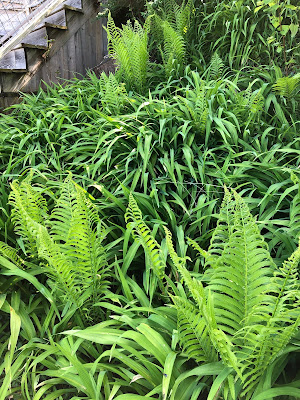 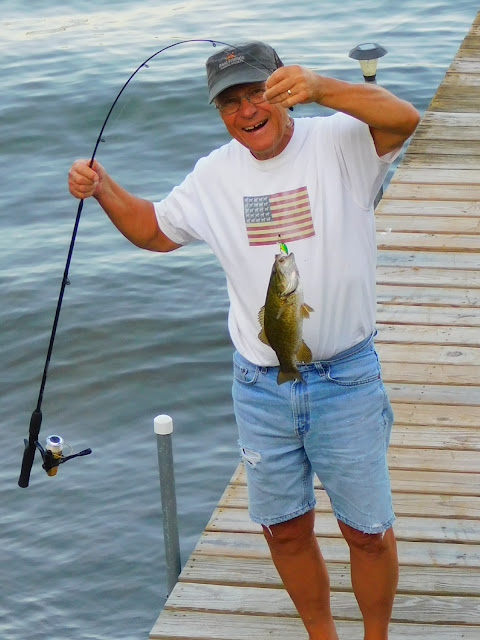