I didn't feel like cooking Sunday evening so Dave waded through the flooded campground to get a take out pizza from the small Brewery next door.    Kaktus Brewing Company is a funky little place in a tiny shack like building in the middle of some mobile homes.    Dave was a little trepidatious entering the place (after he finally found the door) and was met by several undulating belly dancers. And dogs and children with their adults. Our pizza order had been mixed up and then mine had gotten stuck in the oven so he had to wait quite awhile before finally leaving with our dinner.   The pizza was good, but nothing to write home about.   He didn't order any of their beers, the belly dancer greeting threw him off his game.....

MonaLiza and Steve arrived on Monday and were in a spot just one down from us.   We were there until this morning and they will pull out tomorrow, Friday.    Bernalillo was the "cross paths" spot for us, they are moving east and we are heading west on I-40.    We probably won't see them again for quite awhile so we took advantage of their wonderful company.

Monday evening we all drove into Bernalillo to meet local friends at nearby Bosque brewery.    This was a very traditional brewery with what one might reasonably expect to encounter in such a place.    Hector and Brenda have a lovely home in Corrales and we all were so happy that they could spend some time with us.    As usual, I took no pictures but, again as usual, MonaLiza did.  We talked and talked and the evening passed quickly.

Since we had a limited amount of time to spend with Steve and MonaLiza we all piled into the Jeep on Tuesday and headed towards Ponderosa, NM.   I had read about a small winery there (Ponderosa Winery) so that was the only definite spot on our agenda.    We've enjoyed wine tasting with these two before so it seemed like a great way to while away some time. 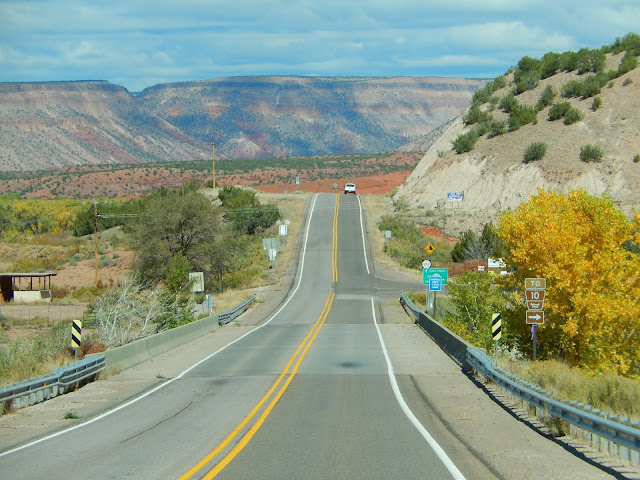 As we turned into Ponderosa Winery's driveway we knew this was going to be a different sort of winery experience. 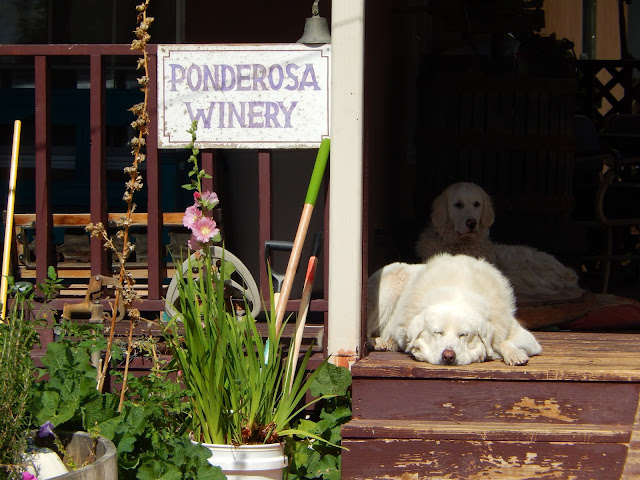 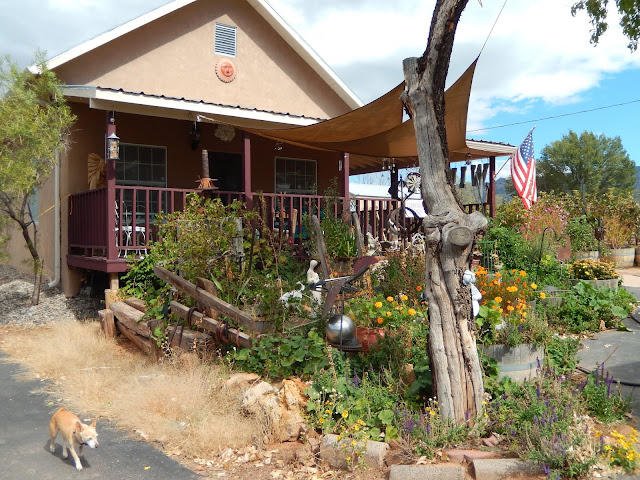 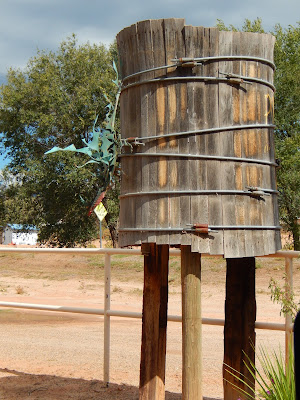 Upon opening the entry door we were greeted by three dogs.   One gigantic Great Pyrenees (one could almost use his broad, flat back as a coffee table), a whip thin white female whose breed was somewhat unclear (she appeared to me to be one of the Paper Eating Hound group as evidenced by several severely chewed rolls of adding machine tape unwound in her dog bed) and a small brown Chihuahua. 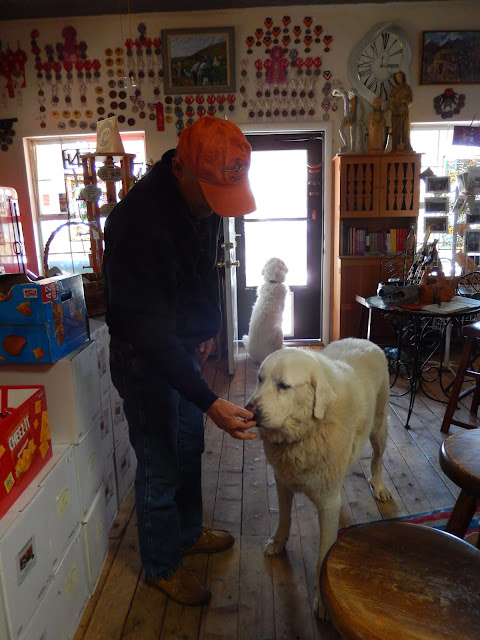 I had read some reviews and was prepared for the owner to be a bit prickly and rude, but she was great.   Her manner was a bit matter of fact and unconcerned as she discharged her large squirt gun between my head and Dave's to remind the thin white dog at the door to stay quiet.    Her aim was good, neither of us got wet and the dog heeded her warning.


The walls of the small room were plastered with ribbons won by their wines.  A good sign.     She passed out sheets of paper with the different wines, their notes and awards won but the printing was extremely small - MonaLiza and I had trouble reading them.   Without a word she plopped a small crock full of reading glasses in front of us.....

MonaLiza tried a few before she found a pair that she liked and we began the official tasting.       We had a good time and left with a couple bottles each.   It was lunch time so we asked for a few nearby recommendations and headed for Jemez Springs to find the suggested bakery. 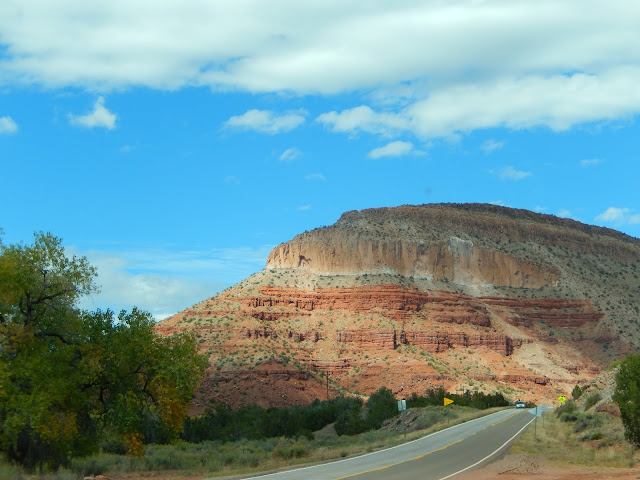 None of us had expected the drive on Rt. 4 to be as beautiful as it was.  The surrounding mesas were so very colorful and the river running alongside the road lent a lush green to the landscape. 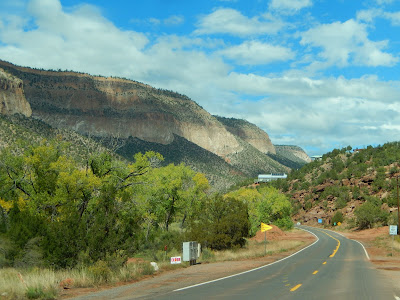 After a few turn-arounds we found the small Highway 4 Coffee and Bakery (it's sign was on the ground, it was being worked on) and had an enjoyable lunch of paninis  and pinon tarts before continuing on our way.


As we began to crest a small hill we saw a fantastic formation that appeared to impede the flow of the Jemez River.     We pulled off the road and climbed over the guard rail to get a better look. 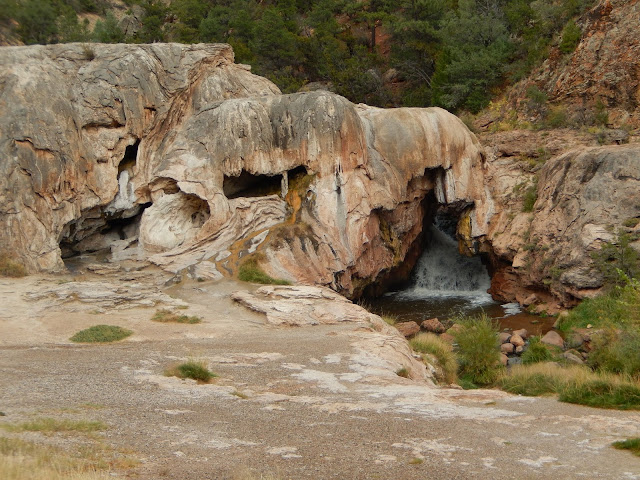 The river had one small area to flow through the natural dam and made a pretty, wide waterfall.

The dam is formed by the build up of mineral deposits from underground hot springs that have flowed in this area for centuries. 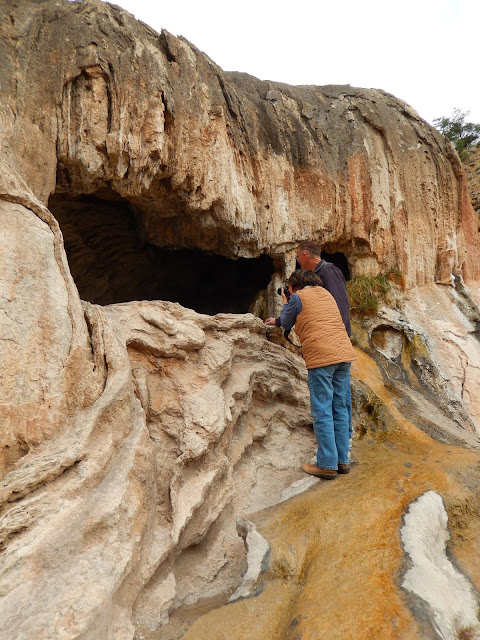 We crawled over the monster awhile, crossing the road to feel the hot water coming up from deep underground. 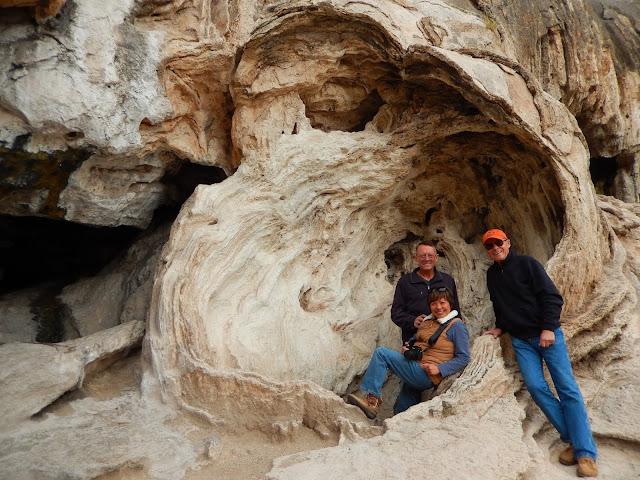 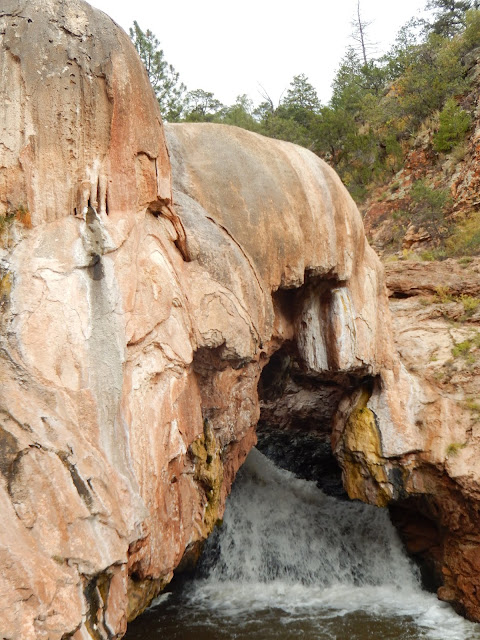 We then continued along Route 4 in search of Jemez Falls.  The Ponderosa Winery lady had given us a local newspaper with some highlights of the area and we were using it to navigate.   As we the road climbed, it began to snow lightly. 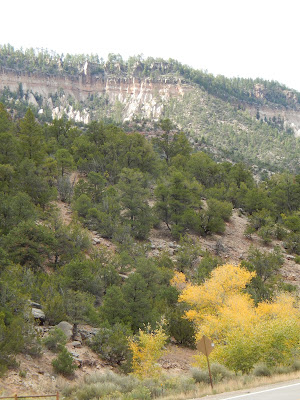 Once again, we ended up passing our turn off (due to somewhat inaccurate  information in that little newspaper) and going back to eventually find where we needed to go.   All in the spirit of adventure! 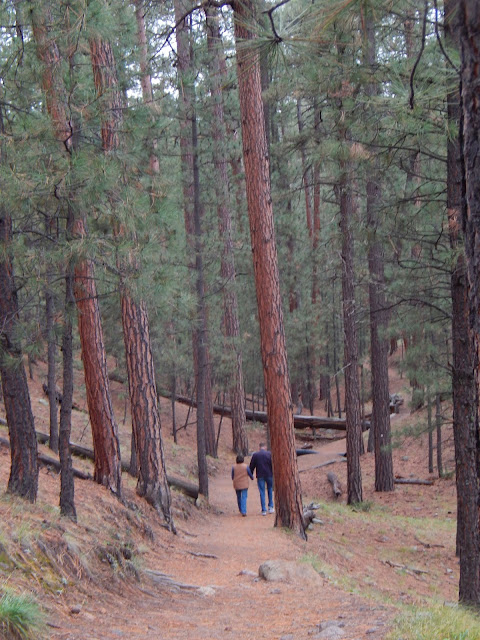 We parked the Jeep in a parking area at the end of the road and set off on a soft, pine needle covered trail in what we hoped was the direction of the falls. 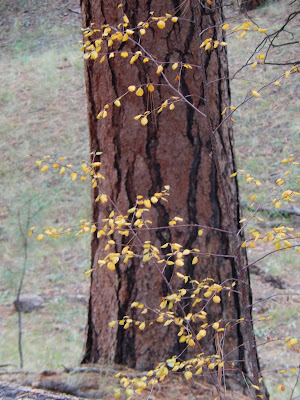 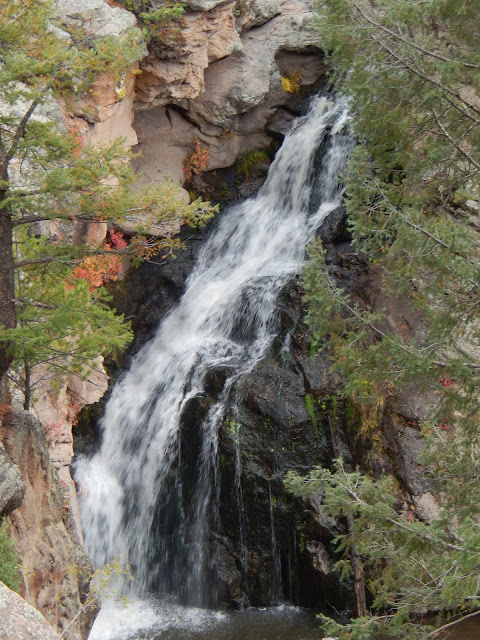 The falls were beautiful.    We were getting cold so we retraced our paths and decided to head back home to enjoy a tasting of some Colorado wines the Lowes had brought along in anticipation of our New Mexico meeting.

One last stop before we got home though.   The task was to find and drive through the Gilman Tunnels just off Route 4. 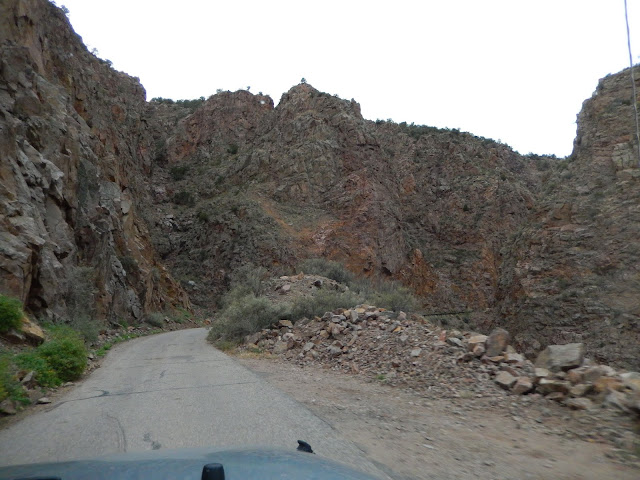 The road became very narrow and appeared to be heading directly into a high wall of rock....we knew we must be approaching the tunnels. 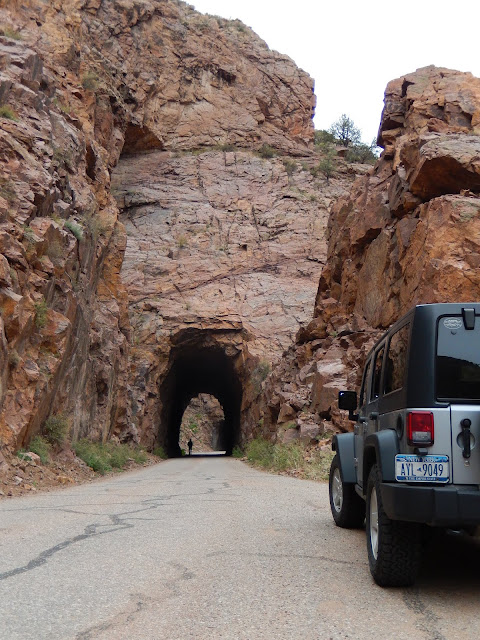 We found a small pull out to park the Jeep and got out to walk through.   There are two. 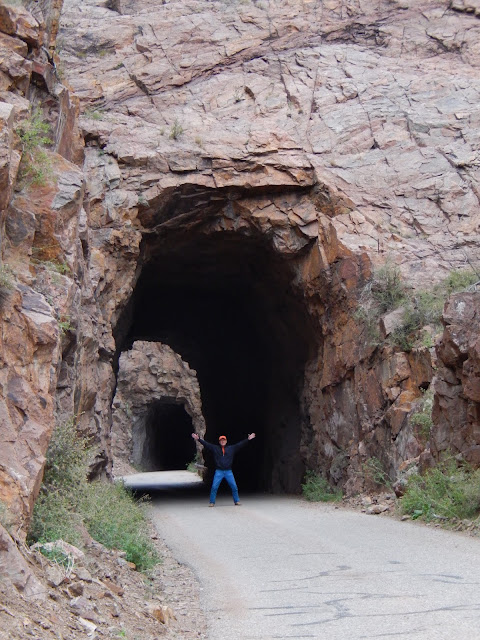 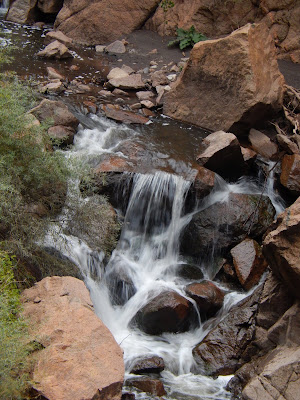 The Rio Guadalupe tumbled down and over the rocks far below us.   The sky was overcast and a strong wind was blowing up the canyon....we were cold so we called it a day and headed home. 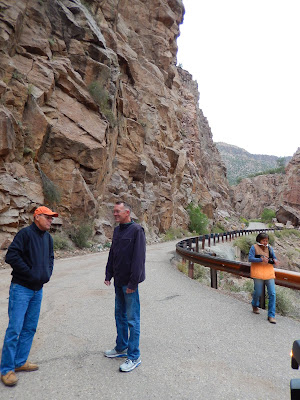 Once home we shared a delicious and unusual bottle of red wine the Lowes had purchased in Colorado and finished up the pizza left over from the belly dancer brewery.

Wednesday was extremely windy and none of us had anything planned so we decided, spur of the moment, to see if we could find and "play" the Singing Road I head read about.    The section of Route 66 is East of Albuquerque, just off I-40 at exit 170.   When you drive eastbound, at exactly 45 mph, and keep your passenger side tires on the rumble strip along the edge of the road, you can hear a soft rendition of America The Beautiful!    Who knew!!!!!

We drove it three times in a row with the third being the best and most clear sound.   We all tried to record it on our phones, but the results weren't really satisfactory.    We all yipped and yelled and clapped like kids when we heard the music...small pleasures! 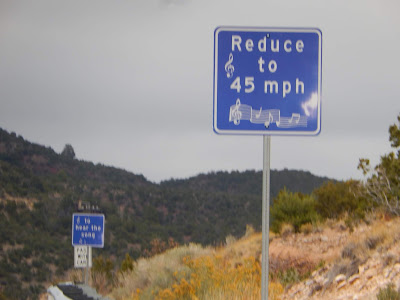 On our way home we turned at a sign for Juan Tabo PG because it looked like the road would take us up into the mountains and the clouds tumbling down them were so interesting. 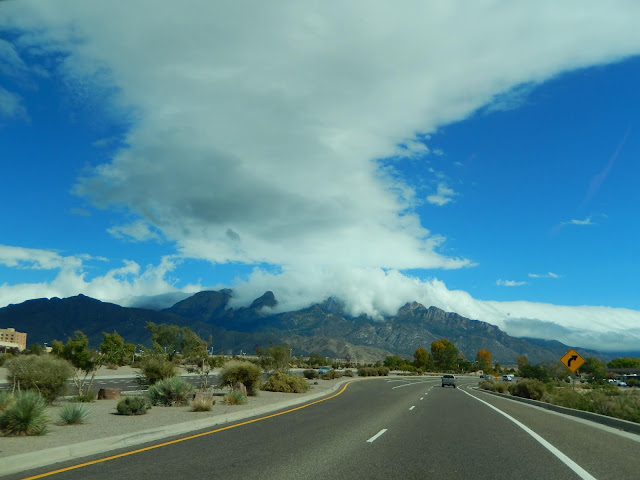 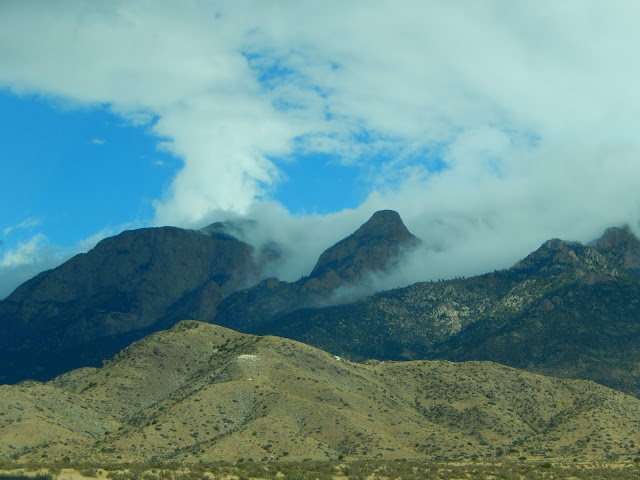 We drove a long loop, stopping to investigate some semi hidden stone structures that we later found out were built by the CCC in the 30's. 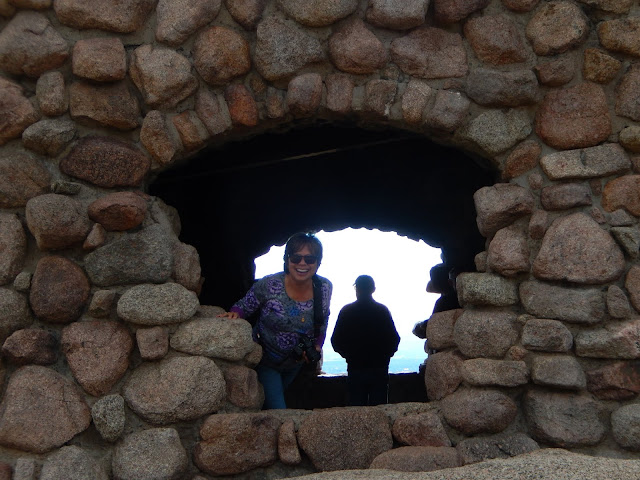 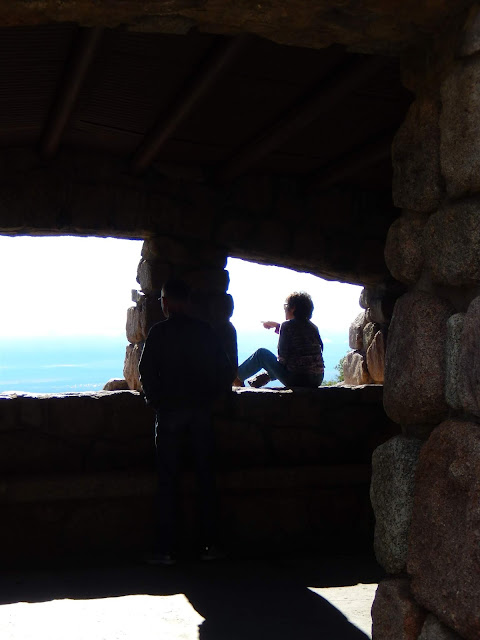 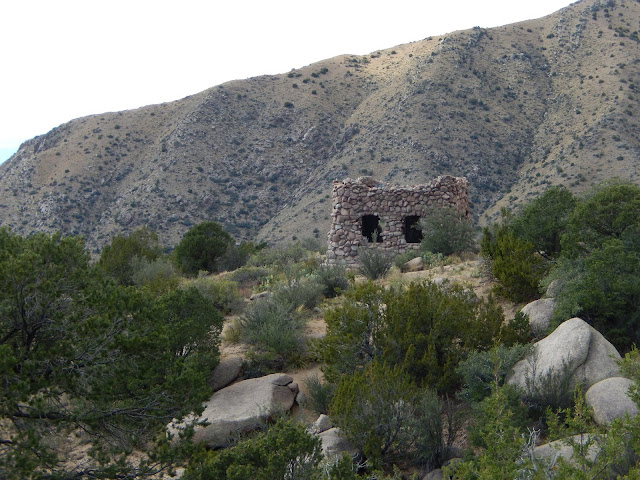 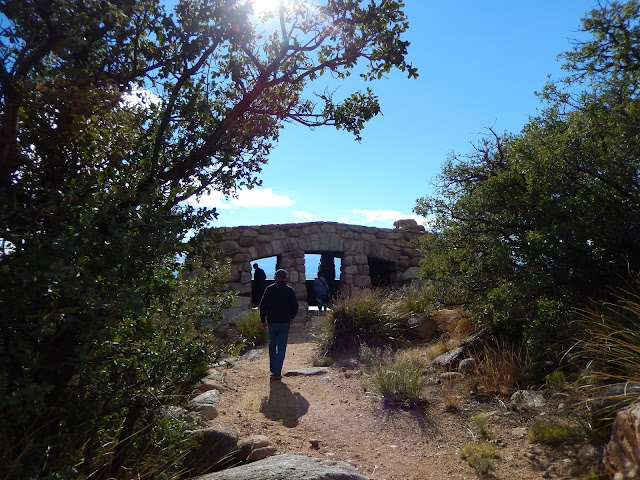 When we got back home Dave gave Steve a hand fixing one of Betsy's rear window awings before meeting up for a farewell dinner and wine tasting.

We left Bernalillo this morning and are in Santa Fe for the next 5 or 6 days.   Steve and MonaLiza will be heading east tomorrow.    It was so nice to spend this time with them, until our paths cross again.