We packed a lunch and headed north west to Bandelier National Monument.  Water, camera, binoculars, sunscreen, hiking shoes, check.  We drove about an hour and arrived at the shuttle bus depot.  The National Monument  had a terrible fire and consequent flash flood that necessitated a ban on all cars into the area, so we took the shuttle bus in.  The reason for the bus only entry is so the Park service can manage who is where in the event of another flash flood.  (the ranger told us that the probability is 100 percent)  Last year this time, the parking lot was under 8 - 10 feet of water from 1/2 inch of rain up canyon.

It is beyond beautiful.  We took a hike through the valley (at 8022 feet above sea level) and followed the trail up and up past the ancient kivas and toward the cliff dwellings carved into the sheer volcanic walls.

My camera stopped.....battery dead.  I was SO mad.  Every turn of the path revealed something breathtaking.  Frijoles canyon went on and on, the bosque was so green, the cliffs so sheer and pockmarked with dwellings...D amn!

These pictures are all I was able to get before the camera went black.... 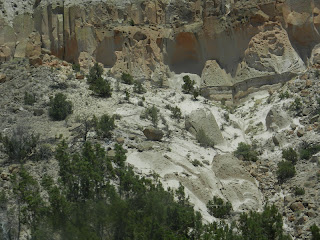 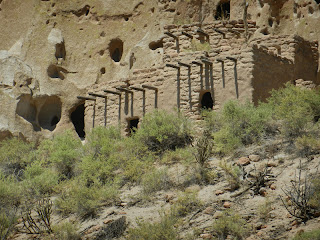 I'm not very good at retelling history. I'm often so overwhelmed  by the sights, sounds, and smells of an area that I don't listen to its story.     I need to experience a place, then read about its history and people later, after I've digested my impressions. So,  read about this amazing area for yourself and then insert these pictures into the story.....Thats what I'll do tonight.