Before I tell you about our Sunday, I think I'd better give you all an update on those pictures from yesterday...Dave is fine.

He was focused on his checklist to break camp (and you all know how focused Dave can get) and stood up when he shouldn't have.  He took the corner of the slide right in the top of his head and it made a very bloody divit.  No hair to protect his scalp, so it bled like a stuck pig.  He came running into Beluga with his hankerchief completely saturated with blood and quickly sat on the floor...Long story short, I closed the wound with butterfly closures and bandaged it and off we went.  (in case you're wondering why he was  holding up his foot,  it was because he was  trying to re-bandage an earlier gouge in his big toe!)  And he's still smiling!

Well, I've been trying to load pictures for the past half hour and nothing is working, so I guess this post will be picture less!  Sorry.

We left western Arkansas' flooded rice fields early today and drove most of the day through Oklahoma.  I was surprised at how many Indian nations the I-40 crossed through.  Names like Shawnee, Seminole, Chrerokee, Creek, Kickapoo, Potawatomi, Cheyenne and Arapaho nations.  We saw license plates bearing those names instead of Oklahoma's as well.

The scenery has changed slowly and we're starting to see huge herds of cattle grazing these flat prairies and even some oil derricks.

We're in a place called Shamrock, Texas tonight.  Nothing around for miles and miles except us and a few other adventurous travelers. Three  young men opened up the metal gate into the field in front of Beluga and drove their red pickup in, unloaded some long guns and a device that looked like a rocket launcher.  Hmmm.
Turns out they were launching clay pidgeons and shooting at them.  Sasha definitely didn't like that.  Yep, I guess this is Texas. 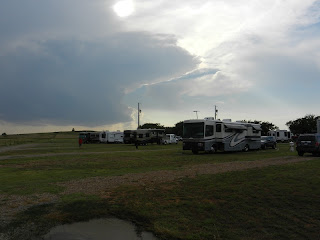 10:30 p.m. Central Time Update - see those clouds above?  I just thought they looked beautiful earlier, so I took a picture of them.   Well, they weren't beautiful at all it turns out.  Terrific storms just blew through here and we couldn't get the NOAA weather radio to work.  Finally did and found out that severe weather was moving very close to us, to the north.  The bus was rocking and rolling and I was sure we were going to blow away.  Dogs were very nervous and so was I, but it has calmed down now.  We're off to bed, sleep will not come easily tonight I think.
Posted by Suzi at 9:55 PM