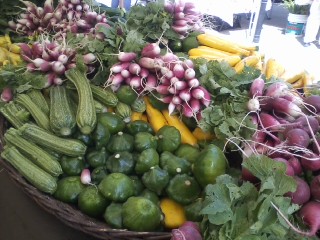 Tuesday is an abbreviated farmer's market in downtown Eugene.  Since we missed the big one on Saturday, we made sure we got ourselves going early enough and drove down to Oak and 8th street.  It was hardly an abbreviated market....so much produce, such beautiful produce.  We bought carrots, cucumber, tiny, multi-colored tomatoes, blueberries, cantaloupe, a yellow french cantaloupe, green beans, new potatoes and a few flowers.   oh my.

Jesse told us not to miss trying a pastie, if we were there near lunch time.  We didn't miss them.  I had a broccoli/cheese one and Dave had a hot dog encased in the same crust.  Mmmmmm.  Then we had a banana/blueberry/strawberry smoothie    We dropped some things off at Jesse's house and went on to Market of Choice for peach pie ingredients.

We made a wonderful melon fruit salad, cleaned the veggies and put together the Peach Sour Cream Pie.  I won't go into details about the pie assembly, but let me just say it was very very messy and frustrating.  Dave and I put a lot of effort into that thing, dealing with a few sloppy missteps.  All was forgotten when we cut into it later at Jesse's house.  It was wonderful and I'll make it again, learning from my mistakes.

After the pie came out of the oven, Dave and I took the dogs for a walk in the woods and gave Lewis some ball time.  We even walked them along the river for a bit before getting cleaned up for dinner.
Jesse wasn't back from the store when we arrived, so we let ourselves in and communed with the dogs while we waited.
I read while I waited for Jesse to get back, Dave and the girls passed the time in their own way.

Delicious Chicken Stir-Fry, Caprese salad (heirloom tomatoes and basil from Jesse's garden), peach pie, a bit of  cool white wine and the men I love most...what more can I ask?
Posted by Suzi at 1:16 AM